Today was an action packed day.  We headed out around 9 a.m. to take a tour of the city and see the Working Boys Center’s first campus.

First stop on our tour was at the National Basilica called Basilica del Voto National. We had an amazing tour led by Marcia and translated by our very own Bronwyn. The church had beautiful stained glass windows and stunning high ceilings. On all the walls of the church were different alcoves each representing a different barrio.  They had a flag from each region and their own version of their “Madre.”  Each Madre had a different story based on the barrio’s traditions and history.

At the Basilica, the daring people in the group climbed up to the tallest tower through steep and narrow stairs to see amazing views of the city and the angel that sits in the middle of the city.  After taking some breath-taking photos we joined the group to go to the top of the bell tower to learn a little more how the Basilica was built. 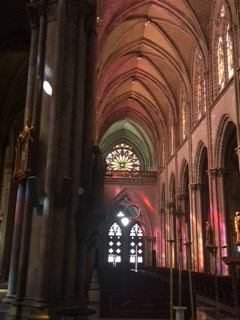 After the tour of the Basilica we walked through the town square which was filled with energy about the current election to the Iglesias de la Compania de Jesus. This a beautiful church with an all gold interior. The church was made with 52 lbs of gold leaf. This is a very sacred church because this is the place where people saw a photo of the Virgin Mary blinking.

Above the church is where the Working Boys Center was founded.  We were able to see the original attic where Madre Miguel and Padre John started everything.

Once we returned home we had a wonderful dinner followed by the reflection done by Marsha. She spoke about putting ourselves in their shoes and imagining a world where America was a third-world country, needing to rely on others to survive. It was a perfect ending to an action-packed day.