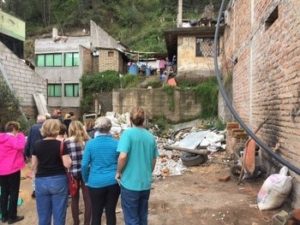 From bizarre anomalies in physics, to human beings living near the edge of survival… today was a day of extremes.

In the morning we loaded into the bus and drove up to THE CENTER OF THE WORLD! There we visited “Museo Intinan,” a famous museum located directly on the equator. There were exhibits showing the wildlife of the Amazon, detailing the ways of life of different indigenous peoples, and, of course, a big red line clearly marking the exact position of the “mita del mundo” as calculated by GPS.

We straddled the line, half of the group in the northern hemisphere and half in the south, and watched as the guide demonstrated the oddities of this place on the planet. 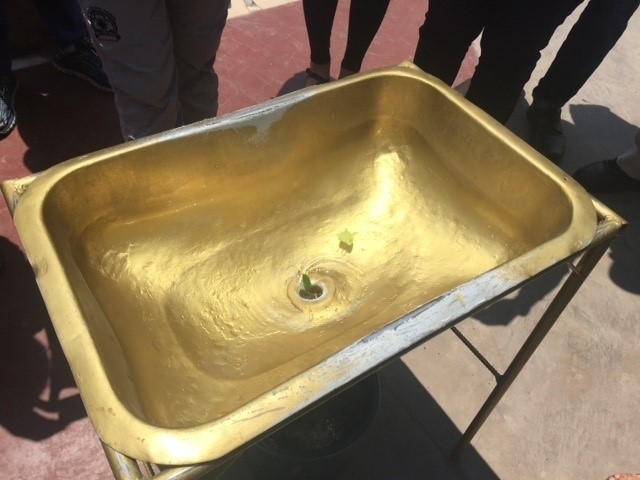 Water going down a drain directly on the equator will flow without any spin, but even just 5 feet to either side of the line will cause the water to spin in different directions.

Visitors to the museum are challenged to balance an egg on the head of a nail (yes… it was raw). This is supposedly easier on the equator due to the Coriolis effect.

In the afternoon, we headed back to the Working Boys Center for a lunch at their restaurant. Then we were joined by Padre John and Madre Miguel and set off to visit the homes of three families who are members of the Center. 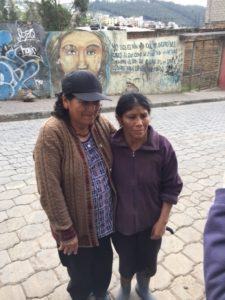 The first visit was a family with five young boys. The family moved from the coast up to Quito after the earthquake in 2015 as they lost everything at home. They live in a humble but clean apartment complex in three simple rooms, each lit by a single light bulb. Their kitchen is indoors, with a gas stove and a borrowed refrigerator. Both parents were searching for work but have been unsuccessful so far. The mom teared up as she described how she didn’t know how they could feed their boys without the Center. You could see the emotion in the father’s eyes as he explained their situation to Father John.

When we arrived for the second visit, it seemed as though the bus had pulled up in front of a vacant lot. There was trash and rubble scattered about with the weeds, and a half-finished concrete staircase led up the hill to some rickety brick buildings. There were two or three dark, damp rooms, each with a mattress or two, and a pile of blankets and clothes. These rooms are shared by two sets of parents, aunts, uncles, and six or more children. The cooking was done outdoors over a wood fire. The rooms are owned by their neighbor, who runs a brick-making business. Most members of the family work mixing dirt and sawdust, then pouring it into the brick molds in the yard. This family had only been visiting the center for five months, but already it [the Center] has made a difference in their lives. The matriarch of the family has been learning to save money, and already has $50 (a few months’ utilities) put away for the future. 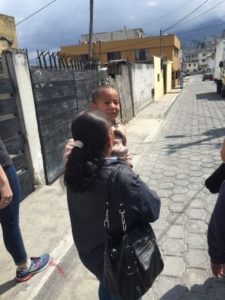 The last family lived on a dirt lane next to farm fields far up in the hills above Quito. The bus drove up an impossibly steep hill to drop us off on the dirt road where we walked to the house. The family has a small courtyard, surrounded by “lean-to” like structures made from bricks and corrugated tin. The grandfather, who owned the land, passed away last year. The mother and father and three kids moved back to the land to be with the grandmother (who is blind). Both parents here are without work, and spend nearly $40/month on their utilities. They found the Working Boys Center through the neighbor, who are members. The rooms here were the smallest and darkest yet. The family shares two rooms and the courtyard. Each room had just a mattress and a few other scattered belongings on the floor. This home was the furthest from the Center, and the family must rise early to travel there each day.

All of these families were very happy and extremely proud to invite Father John, Madre Miguel, and the other “gringos” to their simple rooms. Their life stories are heavy, and their present situations seem just shy of desperate. Despite this, these people have hope of bettering their situation. The Working Boys Center and their incredible programs seem to be the fire that keeps these hopes warm.

In the evening we ate the classic “rice and beans” dinner with honey mustard chicken and a killer carrot cake for desert! We than gathered in the library at the Center for a reflective meditation focused on listening to your heart. It was a long, exhausting, and very rewarding day.