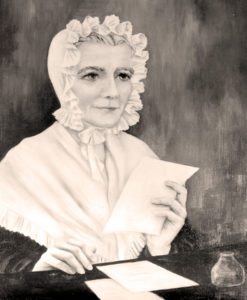 as born in Dublin, Ireland, in 1802, the daughter of Cornelius Clarke and Mary Ann Quartermaster, a Quaker who converted to Catholicism at the time of her marriage. Mary Frances developed a strong sense of inner freedom and survival from her parents’ faith and their example set under harsh penal laws imposed by the English.

From maintaining her family’s business after her father’s stroke to nursing cholera victims in Dublin slums in 1831, Mary Frances demonstrated her resolve and a growing conviction of the importance of education. In 1832, she and four companions established “Miss Clarke’s Seminary,” a school for poor girls in Dublin.

Within a year, the small group of women had crossed the Atlantic, met Rev. Terence J. Donaghoe, and begun Sacred Heart, their first school in Philadelphia. Rev. Donaghoe was also instrumental in the five women forming a religious community, the “Sisters of the Blessed Virgin Mary” on Nov. 1, 1833. Mary Frances, chosen by her companions as “Mother” of the group, retained this position for 54 years.

A decade later, the small congregation of sisters traveled to the Mississippi river town of Dubuque, Iowa, at the invitation of Bishop Mathias Loras. They established their first motherhouse, St. Joseph on the Prairie, 10 miles west of the town.

As Mary Frances and her sisters opened schools for children of lead miners, traders, and pioneer farmers, many new members joined the group. They established schools along the Mississippi River, eastward to Chicago, and westward along the Oregon and Santa Fe trails to San Francisco and Phoenix.

Mary Frances kept in close contact with her sisters living along the frontier through her letter writing. She advised them to welcome all students, regardless of their religious affiliation or ability to pay. She mentored her community through many challenges, trusting them to be mature women, able to creatively adapt and improvise. Mary Frances directed the sisters to “incite the students to ascertain for themselves,” which inspired many generations of female students to become leaders.

With the death of Rev. Donaghoe in 1869, Mary Frances assumed full congregational leadership until her death on Dec. 4, 1887. During her leadership, the Sisters of Charity of the Blessed Virgin Mary (BVM) established nine boarding academies and 40 parish schools for young women. The last school established under her watch was in San Francisco.

With her progressive educational philosophy and collaborative leadership style, Mary Frances helped mainstream frontier families into the life of a developing nation. In August 1984, she was inducted into the Iowa Women’s Hall of Fame for her role in education and religious formation of the American frontier.

Her humility, deep spirituality, and love and encouragement of her sisters resulted in an ever-expanding “circle of friends” that included all members of the congregation, as she encouraged them to “leave the future to God; I have no fears so long as you are working unitedly but that He will aid as in the past.”