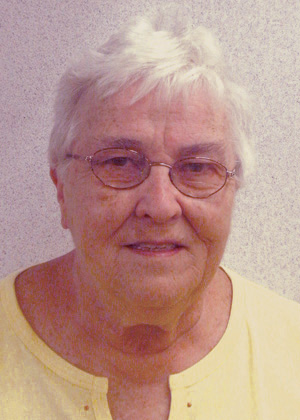 Funeral service was Wednesday, March 31, 2021, at Our Lady of the Presentation Church in Kansas City. Burial is in the Mount St. Mary Cemetery in Kansas City.

Here is her obituary from the Kansas City Star:

Sister Corita Bussanmas, a determined servant of God who often let her actions do the talking, passed peacefully away on March 27 at home with her family. She was 87.

She was born Dec. 11, 1933, in Des Moines, Iowa, the seventh in a family of eight children. She was raised Catholic, with an emphasis on social justice, by parents Otto and Mary Bussanmas.

After high school graduation in 1952, Corita entered Mount Carmel Convent in Dubuque, Iowa, where she took the name “Sister Otto,” in her father’s honor, only to reclaim her birth name later as “Sister Corita.” In 1955, she became a professed member of the Sisters of Charity of the Blessed Virgin Mary, commonly known as “the BVMs.”

She completed degrees in education and Spanish at Clarke College in Dubuque and taught elementary school in Chicago. It was there that she encountered the forces that defined her life’s work.

In 1958, Sister Corita’s order sent her to Our Lady of Angels School in Chicago, where 92 children had just died in a fire. There she learned on the fly how to comfort and teach traumatized children. She also met a fellow BVM, Sister Berta Sailer. The pair bonded while running a club for wayward teens, gang members who called themselves “The West Side Jokers.” Sister Corita never met a youngster in whom she couldn’t see good. “They are the best kids,” she once said, of the Jokers.

Sister Corita arrived in Kansas City in 1967 as principal of St. Vincent’s School at 31st and Flora. Within a few years, the neighborhood makeup changed from mostly Catholic families of European origin to mostly African American families of other faiths. The diocese wanted to close the school, but Sister Corita, backed by Sister Berta, said, “no.” The neighborhood children needed St. Vincent’s, they said.

The nuns taught all day, then spent all evening cleaning classrooms and cooking the next day’s school lunch. Along the way, they opened a daycare center in the convent living room, so mothers with young children could work and support their families.

With Sister Corita as executive director, they incorporated the school and childcare program as a not-for-profit called Operation Breakthrough in 1971. With a pocketbook full of uncashed paychecks, Sister Corita devoted 16 hours a day to keeping Operation Breakthrough’s doors open to the children most in need in Kansas City’s urban core. The commitment jumped to 24 hours a day in 1994, when Sister Corita and Sister Berta became licensed foster parents, then adoptive parents.

Under Sister Corita’s leadership, Operation Breakthrough grew to serve more than 400 children each weekday and earned accolades for combining educational programs with health and family services to help children reach their potential. Sister Corita, along with Sister Berta, received many honors, including the Bank of America Neighborhood Builder Award in 2006 and the Marion and John Kreamer Award for Social Entrepreneurship from the University of Missouri-Kansas City in 2014. Sister Corita has just been chosen to enter UMKC’s Starr Women’s Hall of Fame, along with Sister Berta.

No honor was more important to Sister Corita, though, than being “Mom” to the four children she and Sister Berta adopted: Yauti, Ronnie, Vanshay, and Tyrez and second “Mom” to Chris, Myles, and many others. Sister Corita’s survivors include daughters Kenyauta Sailer and Vanshay Purnell; sons Ronald Sailer and Tyrez Scott; honorary sons Myles Cason and Chris Waxter, along with his children Lailani and Christian; grandson, Kyler Sailer; and many nieces and nephews.

Also surviving are Sister Berta Sailer, of the home, and more than 70 young people who spent some part of their childhood living under Sister Corita and Berta’s roof, including Darius and Jaya Phillips. Her dog, Lady, never left her side.

The family would like to express their thanks to Sister Corita’s devoted care team: Donna, Johnetta, Kisha, Maggie, Paige, Terry, and Vanessa.
Due to COVID-19, Sister Corita’s Celebration of Life will be held virtually on Wednesday, March 31, at 6:30 p.m. A link to the service can be found at www.operationbreakthrough.org.

Instead of flowers, please consider memorial contributions to The Sisters Berta and Corita Irrevocable Trust (for the care of the family) at Country Club Bank, One Ward Parkway, Kansas City MO 64112 or to Operation Breakthrough, PO Box 412482, Kansas City MO 64141. (www.operationbreakthrough.org)

To Sister Corita, every child was “precious,” every day was “marvelous.” Even when her Chiefs or Royals were losing, Sister Corita kept watching and cheering. Worrying, she said, “never makes any difference; God takes care of everything in the end.” With a faith as strong as her will, Sister Corita is likely to be remembered by several generations of Kansas City children as a calm, loving part of their family who made them feel safe and important every day.