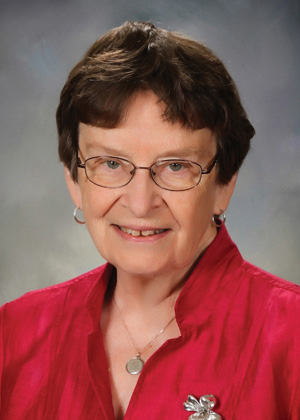 Funeral Services, Virtual Visitation, and Sharing of Memories were Wednesday, June 24, 2020, in the Marian Hall Chapel. Burial is in the Mount Carmel Cemetery.

Sister Carolyn was an elementary teacher at St. Paul School in Davenport, Iowa, and St. Tarcissus School in Chicago; and principal at St. Patrick School in Dubuque.

During her tenure as director of continuing education at Clarke University, she served on the Dubuque City Council and as mayor. Carolyn also served two terms as regional representative in the BVM Congregation and as founding director of the BVM Women’s Office.

In Chicago, Carolyn was interim president of Mundelein College, associate vice president at Loyola University, and founding director of the Gannon Center for Women and Leadership.

She returned to Dubuque to become the director of the Roberta Kuhn Center and served as a member of the board of trustees at Clarke University.

During her retirement, Carolyn continued to advocate for women and justice for all people.

She was preceded in death by her parents and brothers Freddy and John. She is survived by siblings Dolores (George) Zeller, James (Caroline) Farrell, Margaret (Ed) Whitman; and Thomas (Sandy) Farrell; nieces, nephews and the Sisters of Charity, BVM, with whom she shared life for 66 years.

Memorials may be given to Sisters of Charity, BVM Support Fund, 1100 Carmel Drive, Dubuque, IA 52003 or online at https://www.bvmsisters.org/support_donate.cfm


Open to the Call: Carolyn Farrell, BVM
Interview by a Clarke University student, 2016