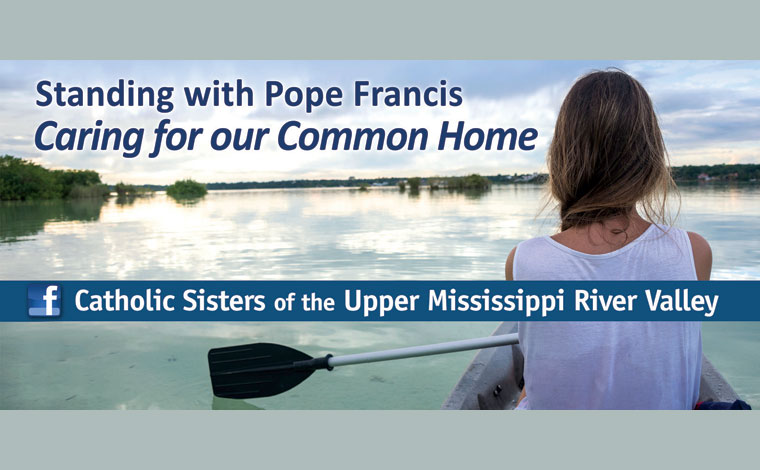 BVMs and other Catholic Sisters of the Upper Mississippi Valley joined together in issuing a call to action to care for the environment—through legislation to reduce carbon emissions, developing clean energy policies, and providing financial assistance to developing countries.

More than 20 billboards with the message “Standing with Pope Francis; Caring for our Common Home” have been placed in Iowa from January through early February in advance of the caucuses to remind delegates, potential presidential candidates, and voters of this critical issue. Billboards are also placed in Illinois and Wisconsin.

In Dubuque, Iowa, about 50 sisters, associates and friends carrying placards with the billboard message gathered at 8th and White Streets for a prayer service on Jan. 27, where one of the billboards is displayed. Watch the video at: https://youtu.be/6broFbs0heY

Prayer services were also held by the sisters in Davenport, Iowa, on Jan. 27, and will be held at the other billboard sites listed below on Jan. 31 and Feb. 2.

Catholic Sisters for a Healthy Earth Committee (CSHE) initiated the plan for the billboards and prayer services. Made up of representatives from the sponsoring women religious communities, CSHE urges others to heed the cry of Earth and of those who suffer from the effects of climate change, just as Pope Francis called us to take action to care for our Common Home in his recent encyclical, Laudata Sí.

CSHE Committee Member Carol Marie Baum, BVM (Joseph Louis) says: “It is our belief that we can make the difference with a change of heart and the realization that as ONE PLANET, ONE FAMILY we are capable of making the choices that can change the trajectory of the future.”

The Sisters’ “Care for our Common Home” message and image was first shared in September 2015 during Pope Francis’ visit to the United States, when ads were placed in USA Today and local diocesan papers.