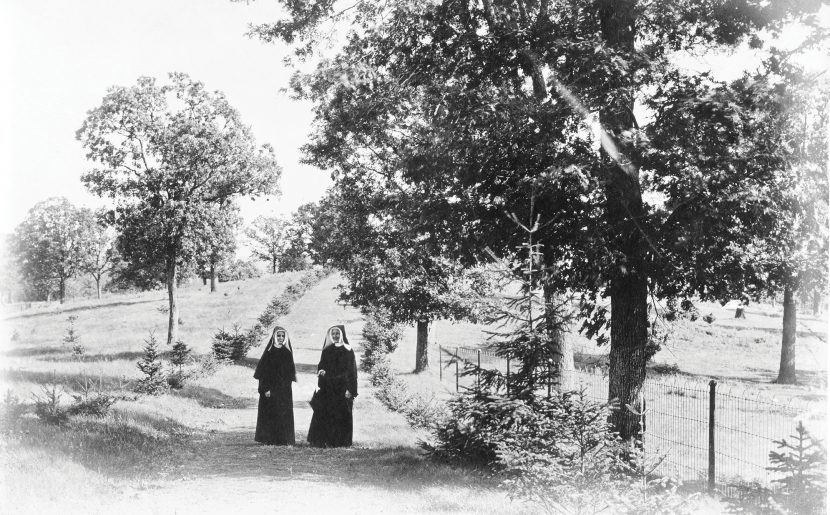 Some people seem to be uniquely qualified for the needs of the time in which they live. One of these, Alice Rutherford, was born a New England puritan in Monckton, Vermont, in 1841.

Her family moved to Iowa when the children were small, and it was there that Mrs. Rutherford and two of her children, Alice and George, became Catholics. Their “apostasy” so alienated Mr. Rutherford that he deserted the family. (He died reconciled to his family and a Catholic.)

Alice taught school in Muscatine until the death of her mother in 1867, when she entered the BVMs. Her abilities in business and administration were immediately obvious to Mary Frances Clarke and Gertrude Regan.

So after three years of teaching, Loyola was made superior, an office she held in various places the rest of her life. She was elected consultor to Mary Frances Clarke in 1881 as well, and served in a similar position under Mothers Gertrude, Cecilia, and Ascension.

Lewine Enderle remembered Loyola as Mother Gertrude’s right hand in financial and building problems, but Valesia Wilkins added a different dimension: she would see Loyola come down to the refectory to visit the resident cat and tenderly cuddle it.

When the decision was made to build a new Motherhouse in Dubuque, Loyola and Gonzaga McCloskey were sent to visit Motherhouses and to consult about sizes, costs, and architecture.

Loyola supervised the construction of the new building.

She was a talented and indefatigable landscaper who had shade trees and pines planted around the Motherhouse, orchards behind it, and a double row of pine trees set along the path to the cemetery. In fact, since oaks were the only trees native to the Mount Carmel property, Loyola is responsible for every other tree and shrub (or its successor) growing there.

Loyola didn’t appear to grow old, although at 74 she was well beyond the life expectancy of the time. She was unfailingly kind, especially to the infirm.

Mother Cecilia tells that as she was dying from the influenza that was ravaging the country in December 1915, Loyola remarked to the sister who was arranging her room, “Say, Sis, it snowed last night and pines and cedars up the walk and out on the hills must look lovely.”

She was pleased to hear that they did. She would have been even more pleased to know that the pines and cedars she had planted on the way to the cemetery would be bending low under the weight of newly fallen snow that Monday in December when Loyola Rutherford traveled the pine walk for the last time.