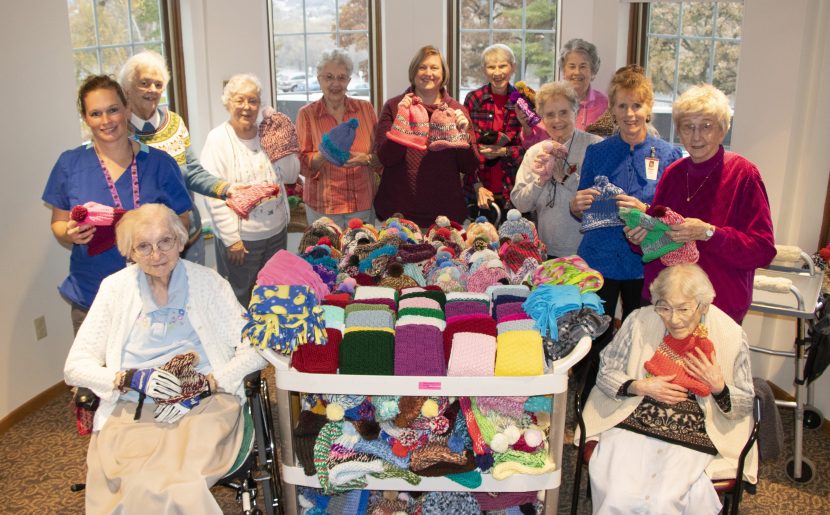 BVM Sisters knitted nearly 450 hats and 56 scarves to be sent to children and adults who need them.


It all started with a gift, and became the gift that keeps on giving.

Several years ago, BVM Isidora Lorentz’ family gave her looms and yarn, and she in turn gave it to the activities department.

And the Knit Wits were born. Since then, boxes of hats and scarves have left Mount Carmel in Dubuque, Iowa, and gone to children and adults to help keep them warm.

It’s not charity. It’s love,” said Catherine Dominick, BVM, who makes four or five hats a week. “I know in my heart that some person is going to be able to keep warm during the winter, their head at least. That gives me so much joy.”

“It’s not charity. It’s love,” said Catherine Dominick, BVM, who makes four or five hats a week. “I know in my heart that some person is going to be able to keep warm during the winter, their head at least. That gives me so much joy.”

She makes the hats in her room while she watches television. “I wanted something to do besides sit there and twiddle my thumbs. I can’t go out and feed somebody. But we’re to clothe the naked, and that’s what we’re trying to do,” Catherine says.

This year, the Mount Carmel Knit Wits sent 347 hats for kids to the Retired and Senior Volunteer Program (RSVP) of Dubuque County, along with 56 scarves that Alice Kerker, BVM hand-knit. 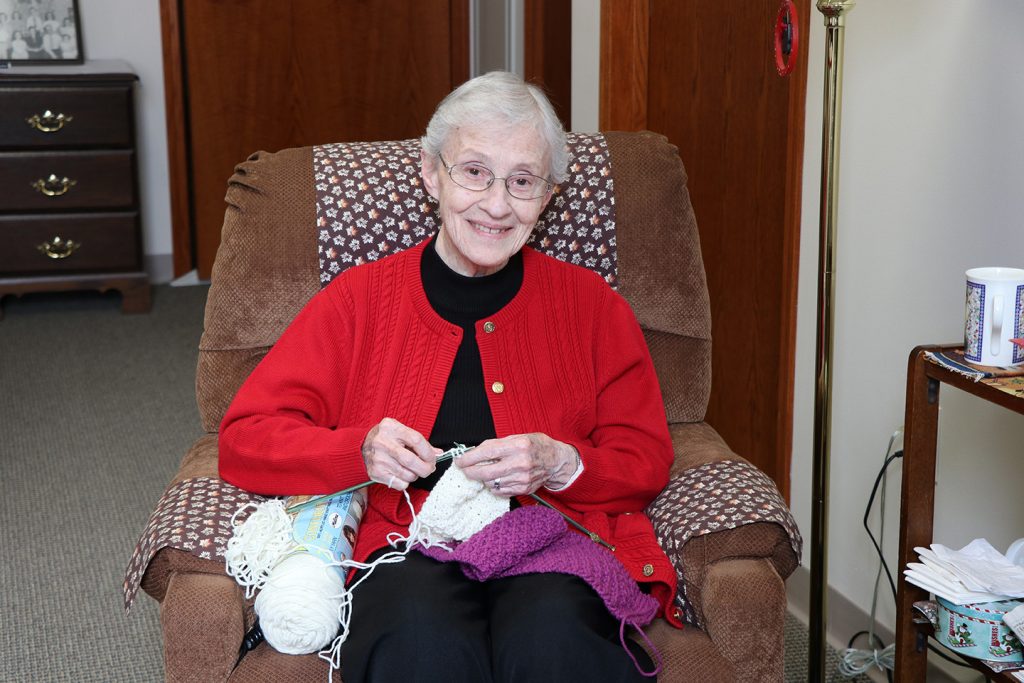 Alice started knitting in high school, when she and group of friends decided to make Argyle socks as Christmas presents for some boys they liked. Over the years, she knitted sweaters and afghans as gifts.

“When I came here (Mount Carmel), I didn’t really knit. But I thought ‘What are you doing sitting here with your hands folded watching TV?’” Alice says.

She went to the activities department and found that making hats was not for her. “So I started making scarves. I stopped putting fringe on them, and made them simpler and smaller,” Alice says.

It is relaxing to work at her own pace with no deadlines or pressure.

The RSVP Lots of Socks campaign collects socks, hats, mittens, and scarves for those in need.

“We send an email to all the nurses in schools, and they let us know how many they need,” says Marie Zoromski, director of the RSVP of Dubuque County, sponsored by UnityPoint Health-Finley Hospital. “If we have excess, we do try to find other homes for them.”

The sisters’ donation has a “huge” impact, Marie says.

The Knit Wits meet Mondays at 3 p.m. “Not everyone stays. They come and pick up yarn, and quite a few just make hats in their rooms,” says Julie Wessels, creative arts specialist. “We have some that will make one a day.”

They rake knit to make the hats: wrap two layers of yarn on the loom and then pull the bottom layer over the top with a crochet hook.

“I have not bought a skein of yarn. The yarn just comes in. We have trunks of yarn back there,” Julie says.

Sisters work year-round on hats and scarves but that’s just one of the Knit Wits’ projects. They make diapers from T-shirts, dresses and shorts from pillowcases, among other creations.

“Anything that’s for the poor or the kids, the sisters are on board,” Julie says.