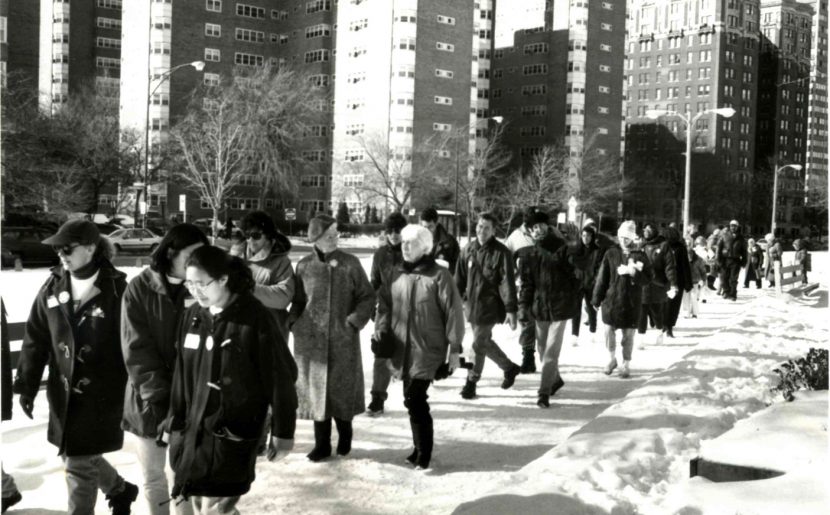 In 1993, BVM Rita Benz (second row, far right) walks a mile in the shoes of homeless women during the first Winter Walk. BVMs have participated in the walk ever since.

I come all the way from the West Side of Chicago to come here because Sarah’s has a staff that really cares and is invested in the well-being of its visitors. I’ve been to a couple of different places, and I feel safe at Sarah’s.” —Resident

The winter of 2019 re-introduced the term “polar vortex” into the vocabulary of many people living in the Midwest with Chicago earning the title, “Chiberia.” The term can spawn explorations to determine its meaning or debates as to whether or not climate change causes this phenomenon. However, for homeless persons striving to survive on the streets of Chicago, “polar vortex” is not an intellectual exercise. It heightens the desperate need for shelter.

With a mission of serving women who are homeless or in need of a safe space, Sarah’s Circle began in 1979 in Chicago’s Uptown neighborhood. In every season, with or without “Chiberia,” Sarah’s Circle has provided support for thousands of women.

Since the initial days of Sarah’s Circle, BVMs have connected to the work of this center. Chris Hannibal, a former BVM, was the first paid director; Rita (Borgia) Benz, BVM served on the board; Carol (Conrad Ann) Cook, BVM served as program director; Margaret (Daniel Anne) McGinn, BVM volunteered for several decades responding to the multiple needs connected with the Center; and BVM Ministry Partnership Grants have been awarded to Sarah’s on multiple occasions.

In 1993 the Sarah Circle Winter Walk, “A Mile in Her Shoes,” began to raise funds and to broaden the public awareness of homeless women. The date for the walk is set during the winter months to provide a hint of the challenge that women who are homeless face in these bitter months. Every year since that initial walk in which Rita and Carol participated, BVMs have supported the walk. Those who are able and live in the Chicago area join the walk; many BVMs and their friends contribute financially.

When asked why BVMs support the Winter Walk, Mary (Patricia Mary) Nolan, BVM shares, “I believe that ‘where one BVM is, we are all there,’ so I can help from a distance. And, I believe women helping women who are dealing with hardship and homelessness need to know we women care. I can’t imagine what it would feel like to be homeless.”

Carol further comments, “The BVM core values are reflected in this walk, especially freedom. The programs at Sarah’s provide ways that women can choose to break away from problems that keep them from being free, from reaching their potential.”

Collaborating with Sarah’s Circle is a natural fit for BVMs. The word “circle” in the organization’s name identifies the style of operation as relational, participative, collaborative, and inclusive—a model consistent with BVM values. The BVM mission continues vibrantly in the work of Sarah’s Circle, providing one more opportunity to accompany women and walk a mile in their shoes.

About the Author: Joellen McCarthy, BVM is recently retired from the 8th Day Center for Justice and currently lives in Chicago.

Uptown Women’s Center was renamed to Sarah’s Circle shortly after opening its doors in 1979. But who is Sarah? Staff at the center have two stories. In one, “Sarah” is attributed to the name of a cat who lived at the shelter. In another, the name is based on a children’s song called “We Are Dancing Sarah’s Circle” sung to the tune of “We Are Climbing Jacob’s Ladder.”

“What remains with me is a deep understanding of the fierce generosity and willingness of these homeless women who lived on the streets, to share what little they had, willingly and lovingly with each other and with those who served there.” —Chris Hannibal, former BVM, Sarah’s Circle Director from 1981–1985

“I visited Sarah’s with a friend and was aware of the pressing need that was being met and of the gentle, resourceful, effective response of the staff and volunteers. The homelike atmosphere and the camaraderie among staff, volunteers, and the women who visited Sarah’s were delightful. My first visit was a moment of truth. I began to want to be a part of the ‘circle.’ —Rita Benz, BVM

This story was featured in: Summer Salt 2019: ‘God Is Within Us Leading Our Way’