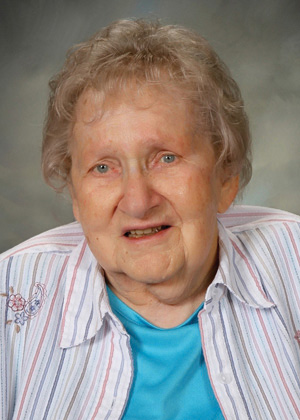 Sister Mary Joel was an elementary school educator in Fort Dodge, Manly, Sioux City and Council Bluffs, Iowa; Rapid City, S.D.; Chicago; and Kauai, Hawaii. She ministered as an LPN and in hospice/home health care in Sioux City. She worked in food service at Mount Carmel in Dubuque.

She was preceded in death by her parents; sisters: Fern Addy, Nan Strasser, Patricia Slebodnik and Ruth Fenton Weis; and adopted brother Robert Kenney. She is survived by a sister Marge (Maggie) Kistel, Safety Harbor, Fla.; nieces, nephews and the Sisters of Charity, BVM, with whom she shared life for 74 years.

Good afternoon and welcome to the celebration of life of our Sister Mary Joel Kramer.

In his letter, James writes, “What good is it if someone says she has faith but does not have works? . . . Faith of itself, if it does not have works, is dead.” Joel’s faith was very much alive. She was a prayerful woman who spent her life giving to others as a teacher, nurse, mentor, volunteer and friend.

Mary Josephine entered this world on July 17, 1921, the daughter of Joseph Bernard Kramer and Margaret Kenney of Le Mars, Iowa. According to her autobiography, she was born on a Sunday morning and her father, “after some hours of tiresome waiting, took off for Mass and missed the great event.” Mary joined siblings Fern and Nan and was followed by Maggie, Patricia, Ruth, and an adopted brother Robert Kenney.

Mary grew up on a farm. “Since the older ones were all girls,” she recalled, “we did many jobs boys ordinarily would do . . . I had a wonderful home life of recognizing and sharing problems as well as coats and clothes and chores. Mom was jolly, outgoing and young at heart with a great trust in her six daughters. Dad was quiet, artistic, patient, loving and a horrible farmer. His great pride was his perfect corn rows for which he was frequently complimented . . . We were raised thinking we were Irish because our closest grandparents were Will and Anna Hughes Kenney and their clan. All holidays and Sundays were spent with them . . .”

Besides the BVMs who taught her at Holy Name in Marcus, Iowa, Mary’s greatest inspirations were her grandfather Kenny’s two sisters who were BVMs: Sisters Mary Emmelian and Mary Eleanor Kenney. Mary entered the congregation on Sept. 8, 1939, and received the name Joel upon her reception on March 19, 1940. She professed her first vows on March 19, 1942, and would have celebrated her diamond jubilee in September. Joel’s cousin Sister Mary Terese Rink, BVM, entered in 1951. “I had no thoughts of leaving ever,” commented Joel. “My biggest fear was that I’d be sent home for being too ‘worldly.’”

Joel was an elementary school teacher for 43 years. She was missioned at Fort Dodge, Manly, Council Bluffs and Sioux City, Iowa, where she taught for 22 years. She was also sent to Rapid City, S.D.; Kauai, Hawaii; and Chicago.

Her mission to Hawaii fulfilled her dream of being a missionary. “It was so very different,” she commented. “All the students came to school barefoot.” True to her adventurous spirit, Joel and Sister Mary Gemma Gini would take students hiking. What a sight it must have been: two nuns in full habit taking off their shoes to cross a stream with dozens of children in tow! They were told that they were the first white women to climb Sleeping Giant Mountain. Joel loved the children and they loved her. As a teacher, she was known for her fairness and inclusivity. She had a way of making every student feel extra special. Former students never lost touch with her and even paid travel expenses for her return visit to Hawaii.

Eventually Joel earned an LPN degree. “After all,” she explained in an interview, “I had been around nursing all of my life. My mother worked with a local doctor on home deliveries and three of my sisters were RNs.” She worked part-time at Mercy Hospital and Marian Medical Center in Sioux City while she continued to teach. After retiring from teaching, she spent the next 15 years volunteering with Amicare, Hospice of Siouxland and Mercy Hospital. She often sat through the night with hospice patients so that their spouses could get a good night’s rest.

In addition to teaching and nursing, Joel loved to travel. She visited Canada and most of the United States. A six-week trip to Italy with Sister Mary Gemma was one of her favorites. She was led by her adventurous spirit to visit the Great Wall of China and she spent a summer living in a mud house with no running water in a remote valley in India. The opportunity to see the Taj Mahal was a childhood a dream come true.

Joel enjoyed sharing her culinary skills with her housemates and even worked in food service at Marian Hall for three years. She was a very creative cook; if she refused to share her recipe, it was because she had made it up as she went along. However, the recipe for her special cake became rather popular in BVM circles. She also displayed her artistic side through sewing and leatherwork and making rosaries from shells.

Warm, generous, thoughtful, big-hearted and fun-loving aptly described Joel. She was a good listener whose words of wisdom alleviated anxiety and offered encouragement. Her gift of hospitality made everyone feel at ease and appreciated. She was a great communicator who kept a stack of envelopes already addressed to family, friends and former students and then she simply wrote a couple of letters every evening. She was always ready to enjoy time with friends, especially for a game of Skip-Bo. It has been said that everyone who knew Joel knows Skip-Bo.

Joel had a wonderful sense of humor that even comes through in her final message to all of us: “I enjoyed my life. I love you all, but don’t wish me back!” Because of our love and gratitude for you, Joel, our only wish for you is eternal happiness in God’s presence.