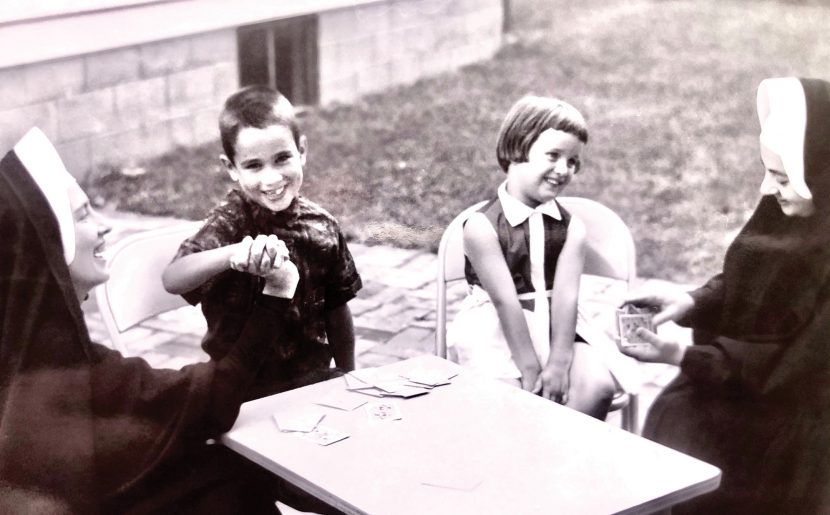 A multigenerational devotion to the Sisters of Charity of the Blessed Virgin Mary began with kindness to a young woman who lost her mother.

Frances Margaret Smith Broderick was attending Our Lady of Angels Academy in Clinton, Iowa, as a boarder when her mother was killed in a train-car accident on the way to Sunday Mass.

“Mom came home for the rest of that semester,” says Frances’ daughter, Marilyn Broderick Duwelius, of Clive, Iowa. “When she returned to school, she said, ‘Sr. Anysia [Norkett, BVM] looked out for me just as a mother would.’” After experiencing such kindness, “Mom wanted her daughters to be taught by BVMs.”

And so they were. Frances’ children were educated by BVMs, as were her grandchildren and great-grandchildren.

Marilyn first met BVMs as a freshman boarder at St. Joseph Academy (SJA) in Des Moines, Iowa. She made friends for life and blossomed as a person.

“Sisters Nan (John William) Ross, Sheila (James Kathryn) Mulvihill, and Therese (Jeremy) Mackin were all boarders and friends when I was there. Who wouldn’t want to keep track and later support vocations like theirs?” Marilyn says.

The teachers had high academic standards and were fair and good to the students, she says. And just as her mother wanted a BVM education for her children, Marilyn did, too.

“Our two daughters attended SJA as day students and had happy high school years,” Marilyn says. “That’s when their dad (Don) got to know the sisters. He has always remarked, ‘They are so bright and accomplished.’ In subsequent years he looks forward to our trips to Mount Carmel” in Dubuque, Iowa.

A Broderick Becomes a BVM

Marilyn’s sister was so inspired by the BVMs that she wanted to join the congregation.

“When Sister Carola (Kathleen) Broderick graduated from the [St. Joseph] Academy, she told our parents she wanted to become a BVM. Our father said, ‘You are pretty young to make a life decision. I would tell you the same if you wanted to marry. How about going to college for two years and we will have this discussion again?’

“Exactly two years later she said ‘I want to be a BVM.’ She received full parental approval. Her family, immediate and extended, was and has remained very proud of her,” Marilyn says. “Carola, our brother, Phil, and I have four first cousins who became religious sisters,” including BVMs Madonna and John Agnes Smith.

“We think all of these women and their wonderful religious sisters have shown the light of God’s love to the world,” Marilyn says.

Other family members share the admiration and support for the BVMs.

“It was everything to my parents to make sure we went to BVM schools. We were a family with eight children whose parents did not hesitate to sacrifice the money for tuition, transportation, and books for a private education,” says BVM Associate Diane Maura Broderick, Phil’s daughter and niece of Marilyn and Carola.

“It was frightening to me. I was a little farm girl” going to school in a big city among people she felt were much more sophisticated, Diane says.

The education was worth all of the sacrifices of time, energy, and money, she says.

Although they lived in a small town 40 minutes away from Des Moines, they didn’t let the distance become an obstacle. The first year, Diane stayed with her grandparents but “I was so homesick for my family that my dad arranged other options.”

One year her parents, Phil and Charlotte, drove them, “sometimes driving through snow drifts that were the highest thing I’d ever seen. I thought they must be mountains.”

Later, a bus picked up Catholic students from surrounding towns and took them to school in Des Moines.

BVM teachers “challenged me, encouraged me, supported me. They created such a big picture for me” with trips to New York, St. Louis, and Washington, D.C. They introduced her to civic and charitable organizations.

Carola, who she knew as Aunt Kathy, was her English teacher.

As a teacher, Carola was “bright, strict, and thought-provoking. She made us feel like literature wasn’t just something you read, but something you absorbed.

“As an adult, she came into my life when I was trying to make tough decisions: marriage, where to live in the world,” Diane says.

Carola was her confidante as well as a role model.

“The BVMs were my inspiration,” she says.

In retirement, she became a BVM associate. The process was “soul searching and very intellectual. It inspired me to grow and become a deeper person. It helped me define my life goals and values as I’ve retired.”

She and her husband Jim Russell support BVMs financially because of their careful discernment of projects and organizations that carry on the core values.

“They know of world-wide organizations that I would never be aware of,” Diane says. “They have dedicated their lives to creating a network of support for people around the world.”

Many other family members are generous BVM benefactors as well.

Michele Duwelius Whitty, Don and Marilyn’s daughter and Carola’s niece, is an alumnae of SJA and Dowling High School in Des Moines.

“When my husband [Steve] and I do our charitable giving, it’s really focused on who has been influential in our lives,” Michele says. “It really honors Carola’s legacy” and the legacy of other BVMs who taught Michele.

Her aunt was a quiet presence in the family, took a keen interest in her nieces and nephews, and had a fun sense of humor, she says.

“When I think of her, I think of femininity and beauty as it relates to music and nature,” Michele says. When Carola was teaching music in Davenport, Iowa, the family loaded up the station wagon on a school night to attend her spring and Christmas concerts.

“She was an extremely good listener, and people in our family appreciated that,” including grand-nieces and nephews. “I think the kids told her things sometimes that they didn’t tell us. She was a safe person to talk with.”

Carola taught humanities to Michele, which made her feel special. Through Carola, family members met other BVMs, who attended family graduations and weddings and prayed for special intentions. Those friendships endure today.

“Through my entire life, I have felt connected to BVMs and Mount Carmel,” where she listened to dining table discussions about politics and policies, particularly about justice, education, and women’s leadership, Michele says. “I always came back inspired.”

Carola gave her the crucifix from her freshman home room, and other mementos are throughout Michele’s house and garden.

When Carola died in 2010, BVMs sent notes that created a “very enveloping feeling” of care and comfort, Michele says.

“I have always felt like a lot of BVMs who have passed and aren’t with me in life are with me in spiritual life,” she says.

The kindness that first inspired devotion to the BVMs continues, and so does the reciprocal admiration and support of the BVMs by many members of Frances Margaret Smith Broderick’s extended family.

About the author: Mary Glindinning is a communications specialist for the Sisters of Charity, BVM in Dubuque, Iowa. 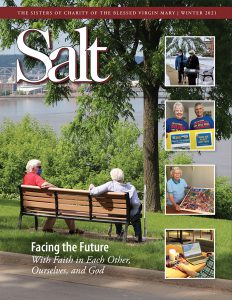 WINTER 2021: FACING THE FUTURE In this issue of Salt, we share how the Sisters of Charity of the Blessed Virgin Mary cope with COVID-19, persist in working for justice, and find partners to continue their missions, all while they look for creative ways to communicate, express gratitude, and pray for all the world’s citizens and creatures.