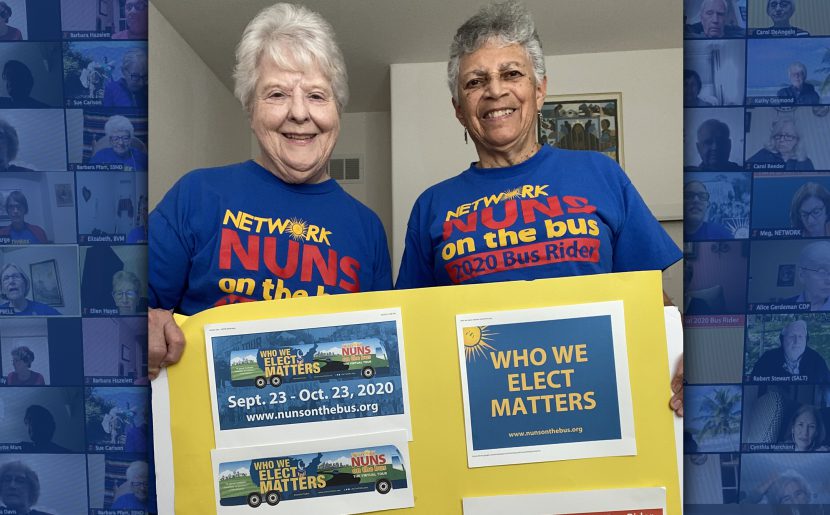 BVMs Marilyn Wilson (l.) and Elizabeth Avalos attended town halls across the country with Nuns on the Bus.

BVMs joined a virtual Nuns on the Bus tour this year for town halls and discussions with voters across the country.

“At each stop, I found the participants eager to share, to learn from one another, and most especially, they left knowing and feeling supported in their social justice advocacy,” Elizabeth says. “The other inspiring aspect of these tours is to see the wonderful hands-on work that people are doing in their local community and how that is strengthened and supported by their faith. The feeling of isolation and being alone were somewhat abated by the Nuns on the Bus virtual tour.”

Marilyn (Claudia Mary) Wilson, BVM said the issue is “Who We Elect Matters,” and she talked to people in Illinois, California, Kentucky, and Wisconsin.

The tour focused on the “importance of being a multi-issue voter,” Marilyn says. “Multi-issue means that the voter does not focus on only one single issue but believes that the most pressing social justice issues—global health crisis as well as racism, white supremacy, xenophobia, and economic inequality in our nation—are all connected and interrelated.”

Access to health care, housing, adequate nutrition, living wages, and just immigration policies are moral issues, according to the Network Lobby for Catholic Social Justice, which sponsors Nuns on the Bus.

“Using Pope Francis’ teachings through the Equally Sacred Score Card, Catholic Social Teaching elements, and our own lived experience, we hope to encourage, motivate, and embolden voters to be multi-issue voters and to engage others in conversations around the many issues facing us today,” Marilyn and Elizabeth say. “Many commented on the feeling of being a part of a community of hope, if only for 90 minutes. And that gave them the impetus and support needed to keep working for justice.”

Theresa (Martin Jerome) Caluori, BVM found insights from a Dubuque Nuns on the Bus stop helpful. “This year the value that I hold close to my heart is: Which candidate’s words and actions respect the dignity of every single person?”

Using a guide called “Equally Sacred Priorities for Voters in the 2020 Presidential Election” and the Beatitudes in the Gospel of Matthew, “I pray for wisdom to discern my vote,” Theresa says.

“We are called to bring our faith values into politics,” according to the Nuns on the Bus website. “A budget is a moral document. Tax policies are moral decisions. Immigration procedures are moral verdicts, with life and death consequences.”

We are called to bring our faith values into politics,” according to the Nuns on the Bus website. “A budget is a moral document. Tax policies are moral decisions. Immigration procedures are moral verdicts, with life and death consequences.”