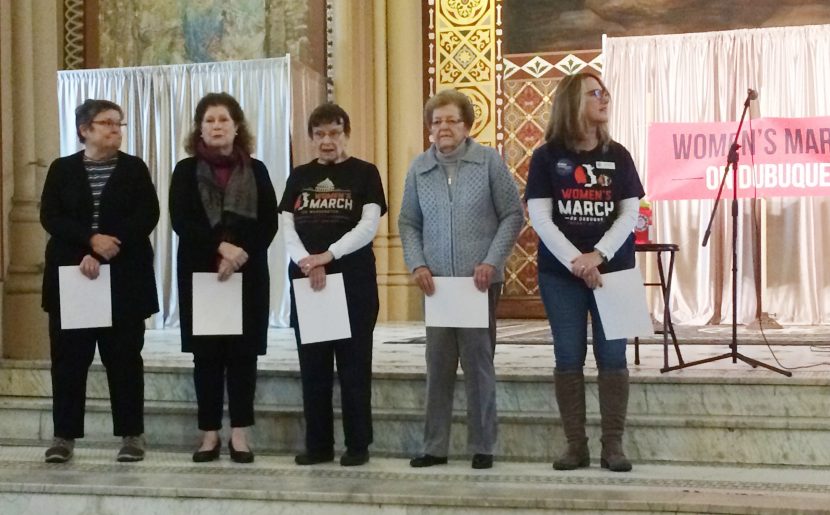 BVMs Carolyn Farrell and Catherine Dunn (third and fourth from left) were recognized as women who have made a difference at the Women’s March Jan. 25 in Dubuque, Iowa.

“The whole event was very spirit-filled,” says Carolyn Farrell, BVM. “You felt the energy there. It was very life-giving to be part of the crowd.”

“There have been women on the council ever since,” Carolyn says. “If you can get one woman to break a barrier, others follow.”

If you can get one woman to break a barrier, others follow.”

About 100 people attended the march, which had been postponed due to inclement weather Jan. 18. It celebrated a century of women’s suffrage.

Carolyn draws a parallel between winning the right to vote and other endeavors for equal rights for women. “How does change take place? I believe through raising consciousness, education, and working for social change,” she says.

Women’s rights have long been her cause. “When I was teaching first and second grade, those little girls were just as smart and able as the boys, so their opportunities should be the same,” Carolyn says.

Catherine Dunn, BVM was honored for her leadership as president of Clarke University, being the first woman to chair the Iowa Transportation Commission, serving on city and community boards, “and my leadership promoting women. I am so pleased to be a member of a congregation that has made such a difference in our world.

“We have helped young women and young men become something they never dreamed they would just because we were part of their lives. It’s the greatest gift I’ve been given,” Catherine says. “We have touched many lives, both men and women, but I always want to promote women because women don’t always get the chances that men have always had.” 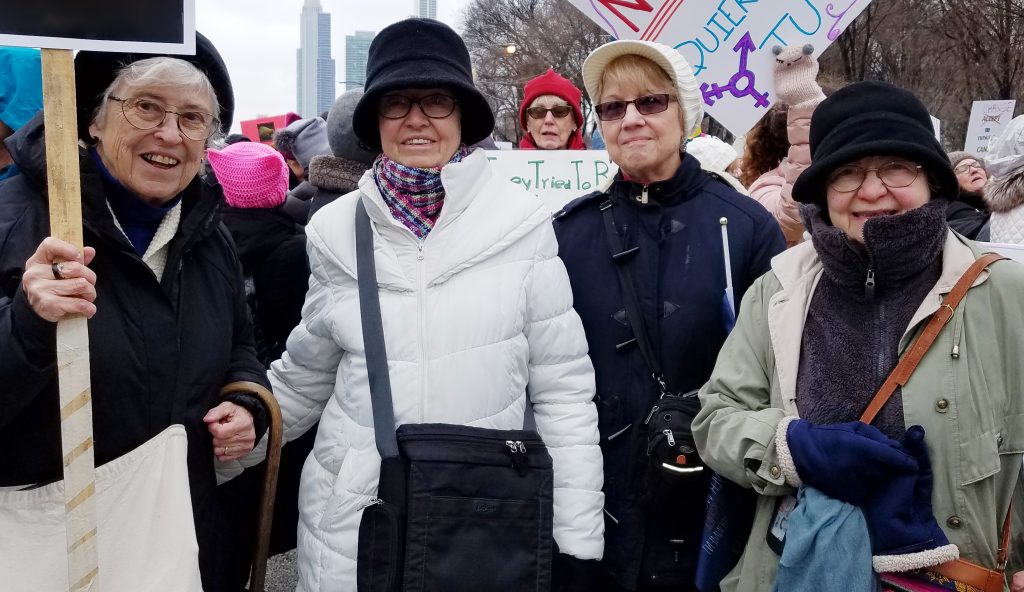 BVMs Gwen Farry and Joellen McCarthy, a friend Kathi Braswell, and BVM Mary Ellen Meckley brave the cold to attend the Chicago Women’s March Saturday. Not pictured is BVM Colleen McGinnity who marched with the group.

“Being with such an enthusiastic, creative, and multi-generational group of people on Saturday brought me great hope for continuing to believe that a more just world is truly possible,” says Joellen McCarthy, BVM, who marched in Chicago Saturday. “We are living at a time when women know that they are capable of bringing about significant change and find strength with others to accomplish these changes. A march such as this, I believe, most benefits those who participate. The messages carried by the groups may inspire others to take action, but I don’t think this is the primary reason that these marches take place. For me, marching translates into some type of concrete action.”

We are living at a time when women know that they are capable of bringing about significant change and find strength with others to accomplish these changes.”

“I recall a saying shared with me some time ago. I don’t know its author. The statement is something like this: ‘I participate in acts of resistance not to change a system but to assure that the system does not change me.’ Having an opportunity to participate in an action such as the Women’s March reminds me of what is important in my life and the deep desire to stay engaged in making this happen,” Joellen says.