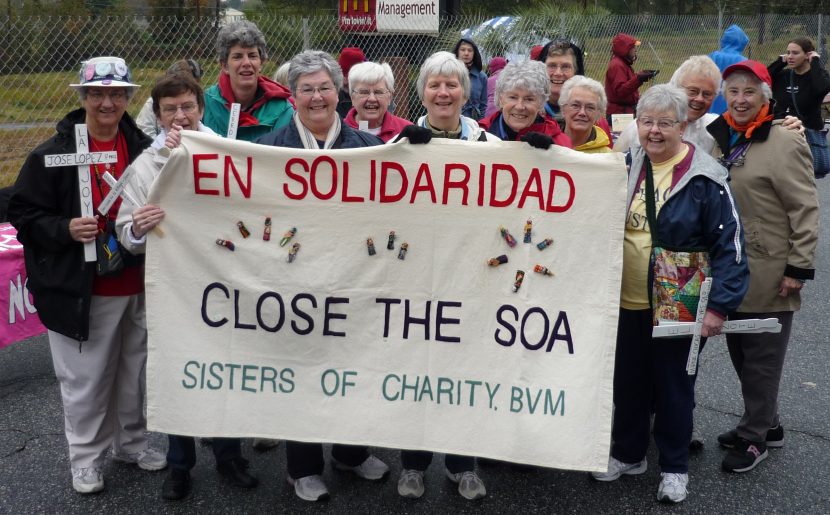 The Winter 2010 issue of Salt magazine explored the long-standing presence that BVMs have had at the School of the Americas vigils.

It’s been years since Florence (Floretta) Heflin, BVM read an article about the School of the Americas (SOA) at Fort Benning, Columbus, Ga. Along with the purpose and goals of the school and the decision of many people to work to close it, Flo also learned that the school is funded by the U.S. government to train Latin American soldiers in the ways of war. Flo learned those “ways” include “torture, rape, kidnapping and murder.”

Flo was angered and saddened by reports of the thousands of victims—men, women and children who had suffered violence at the hands of their own countrymen, some of whom were soldiers trained at the SOA. In November 1998 she joined a group of BVMs planning to attend what had by then become an annual prayer vigil to close the school. The vigil is sponsored by a not-for-profit group known as the SOA WATCH.

The SOA was recently renamed the Western Hemisphere Institute for Security Cooperation (WHINSEC). Its graduates have been linked to the murders of Archbishop Oscar Romero and four American women missionaries in El Salvador in 1980, as well as the 1989 murders of six Jesuits, their housekeeper and her daughter, also in El Salvador.

Flo, who serves as one of two full-time Community Representatives for Dubuque’s Mount Carmel complex, has been organizing BVM SOA presence for the past several years.

Each September, BVMs and associates receive an e-mail from her requesting that anyone wishing to attend the SOA vigil in November indicate their need for accommodations in the “BVM Motel” near Columbus, Ga. It’s a reminder for frequent attendees to sign up and a wake-up call for others who “might go someday.” Flo makes the reservations, notifies the folks and keeps and generates the lists of names within the community; she also serves as a resource person for those who want information about the SOA.

This November marked Flo’s twelfth year in attendance at the SOA Vigil. “I continue to go,” she reflects, “so that I will not forget and become passive about the horrible things that have occurred, and continue to occur among the poor in Latin American countries. Being present there helps me to remember that these are God’s people, my brothers and sisters, deserving of my care and involvement.”

“Going to SOA” usually means flying or driving to Columbus, Ga., on the Friday before Thanksgiving, finding lodging and spending the weekend attending various events sponsored by the SOA Watch, Pax Christi and other peace and justice groups.

The major event, a solemn prayer vigil, occurs on Sunday morning. Protestors walk quietly and in peaceful procession to the gate of Fort Benning, where they attach crosses, flowers or other mementos to the fence at the entrance, in remembrance of the dead.

As they march, speakers read the names of the known dead and protestors raise their crosses or arms and chant “Presente.” “I’ve been affected by hearing the names read,” Flo muses. “We [U.S.] train people to torture and to kill others and then to ignore that it happens . . .” Memorable among the protestors are the puppetistas—life-size puppets representing actual people who have been murdered in Latin America, allegedly by those trained at the SOA.

A concern always is to keep the SOA Vigil alive, to swell the crowd of protestors at Fort Benning. Peak crowds have been upwards of 8,500 people. This year’s total numbered approximately 6,500 and included 12 BVMs and one BVM associate.

Hundreds of young people also came, many from Catholic high schools, colleges and universities. “I was impressed,” Flo states, “by the many young people this year . . . kids with pink hair and yellow hair and shaved heads, with knee boots and bare feet . . . dressed in baggy clothes and wild colors. They were . . . respectful, polite and gentle with each other . . .  reverent, sincere and wholly involved in the peaceful prayer and march. As I watched them . . . I wondered, ‘Why do they come?’ Surely there are more fun-filled, carefree ways to spend this weekend.”

And why might anyone spend a weekend at SOA? Perhaps the “Community Blessing” offered for all and printed in the SOA Watch 2009 Program of Events indicates a reason:

May love and mercy go with you
as you speak in solidarity with those
who have been silenced by death and repression.
Through your witness, may their voices be heard here . . .
and in the hearts of people across the Americas
so that the School of the Americas will be closed forever.

Live simply and justly in solidarity with the poor and marginalized, and be a good neighbor.  Make no war on them, rather, be one with them in spirit, truth and love . . . Hear the truth when it is spoken to you . . . and speak truth to power.”—Archbishop Oscar A. Romero

About the author: Pat Nolan, BVM was previously a member of the English faculty at Clarke College, Dubuque, Iowa. Pat retired from teaching in May and is currently enjoying the luxury of “unscheduled time!”