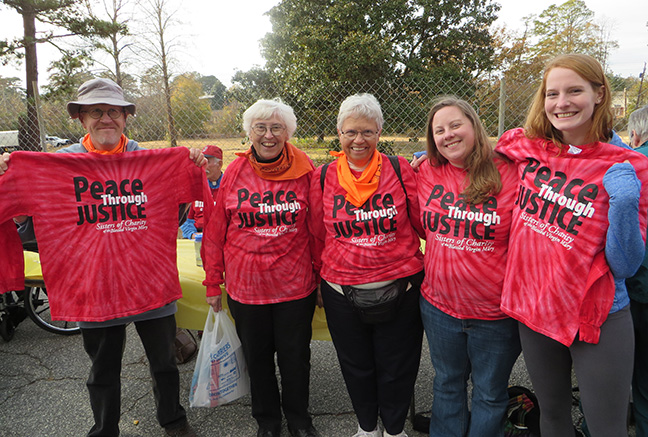 Though Marge Clark, BVM (Marie Margaret) officially put away her lobbyist shoes on Oct. 31, this Capitol Hill advocate for justice won’t be slowing down!

Marge plans to increase her work with the Sisters of Charity, BVM Shareholder, Education and Advocacy (SEA)) group, pursue her photography interests, read some good books, and take a little time to see the sights in Washington, D.C., which she hasn’t had a chance to do!

That’s because Marge has spent the past 13-plus years tirelessly advocating for social justice and the common good at NETWORK Lobby, “a Catholic leader in the global movement for justice and peace—[which] educates, organizes, and lobbies for economic and social transformation.”

“Network is a good place,” Marge says. “I will miss it, but won’t disappear from the people. I’ll miss the many friends and associates working on Capitol Hill and in the coalitions with which I work.” She feels that “people my age need to move out of the way in order for the next generation of wonderful, bright young people to move up.”

Marge will share her thoughts and reflections on her years at NETWORK in the upcoming winter issue of Salt magazine, published by the Sisters of Charity, BVM. Salt is also featured online on the BVM public website.

Marge’s closing sentiment reflects the community of fellow BVMs with whom she’s shared her life and mission. “Retire? Doesn’t it mean getting new tires on which to run?”

Read more about Marge on pg. 9 of Network Connection.