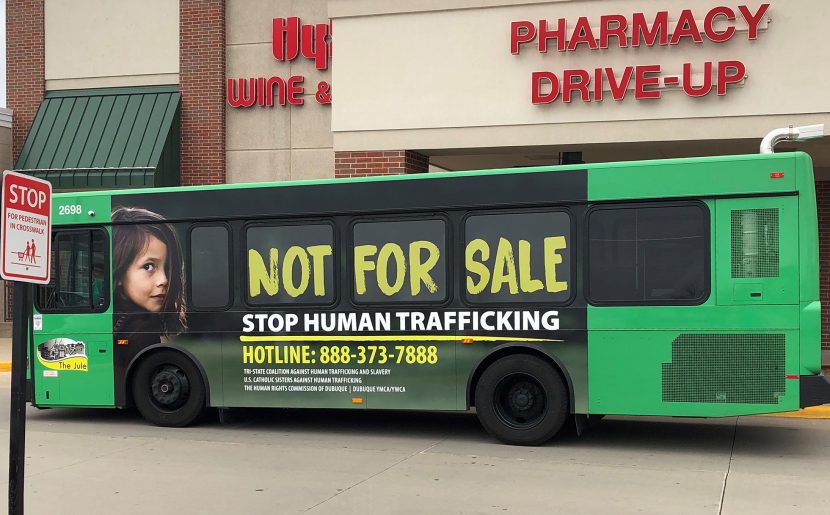 A Jule bus with a strong new message is traversing Dubuque, Iowa, streets that includes the national hotline number: 888-373-7888.

Women religious in the Dubuque area are the prime sponsors of a bus wrap featuring a photo of a young girl to drive home a growing reality: “Not for Sale: Stop Human Trafficking.”

The wrapped bus will spread this message for the next year as it travels all the city routes. It is a follow-up to human trafficking awareness training sessions given to approximately 70 local bus drivers at the Jule Transit Company.

The area’s Catholic Sisters founded the Tri-State Coalition Against Human Trafficking in 2014, and it has grown to include Associates and others dedicated to the elimination of trafficking. The coalition’s hope is that the awareness of and response to the message will prevent vulnerable young persons from becoming victims of this crime against humanity, and encourage people to contact the hotline if they see anything suspicious. 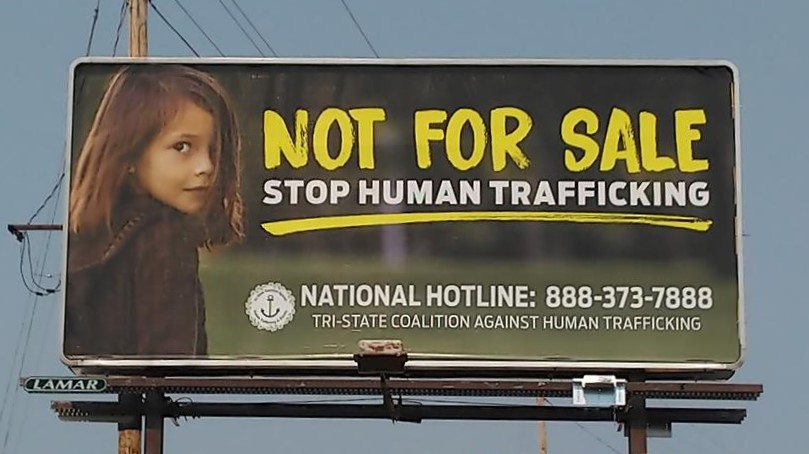 This same message was posted on a billboard on US Highway 20 between Dubuque and Dyersville in August. The timing was intentional. Large public events like athletic contests and fairs are a magnet for traffickers, and in Dubuque County none was bigger than the major league baseball game on Aug. 12 between the Chicago White Sox and the New York Yankees at Dyersville’s iconic Field of Dreams. Eight thousand fans cheered on their teams, and ancillary events like concerts drew additional enthusiasts.

“We want to help people realize that no person is a commodity to be sold,” says BVM Sister Irene Lukefahr, a coalition member. “Each person is a beloved daughter or son of God, worthy of dignity and respect, not a tool for pleasure and profit.”

This is only one of the educational initiatives of the Coalition. In addition to presentations to faith and civic groups and students, they have trained hotel and motel staff on the signs of trafficking within their facilities.  A news conference celebrating completion of the first such training caught the attention of a state legislator. He introduced a bill stipulating that all lodging facilities doing business with the state of Iowa complete this awareness training and be certified.  The bill passed unanimously, and goes into effect on Jan. 1, 2022.

Coalition founders and members are the Franciscans, Presentation and BVM Sisters in Dubuque; the Sinsinawa Dominicans in Wisconsin; and the Mercy Sisters. Those interested in the bus wrap project may contact Irene Lukefahr, BVM at ilukefahr@bvmsisters.org.

Spurred by new law, local hotel staff members learn sign of human trafficking
Local hotels either have completed or are in the process of completing voluntary training to help prevent human trafficking, training that originated with an Iowa bill proposed by local legislators. The legislation came about following an event about human trafficking held by the Tri-State Coalition Against Human Trafficking, and the effort was also strongly supported by all the area congregations of women religious: the Sisters of Charity, BVM, the Dubuque Franciscans, Presentation Sisters, Sinsinawa Dominicans and Sisters of Mercy. These communities were the initial founders of the coalition and continue be significant supporters both in financial support and membership.

Exploring Intersections: Ending Human Trafficking
Watch or download the podcast and learn how can we help those we cannot see? How does one empower those who are in chains? Human trafficking, as far-reaching and insidious as a global pandemic, knows no boundaries—whether by online home invasions or physical coercions dressed as dreams.

Exploring Intersections: Catholic Sisters on Racism, Migration and Climate is a collaborative project of LCWR Region 10, which includes congregations in Iowa, eastern Missouri and Nebraska, joined by a few additional congregations from Wisconsin.

Human Trafficking Congregational Stance:
The Sisters of Charity of the Blessed Virgin Mary, in accordance with our mission and core values of freedom, education, charity and justice, have taken the following congregational stance:

HUMAN TRAFFICKING: We oppose the trafficking of human persons, a form of modern day slavery, for any purpose whatsoever. We stand in solidarity with all who work to eliminate this tragic evil. (2014)

Read other stories related to how BVM Sisters fight against human trafficking.