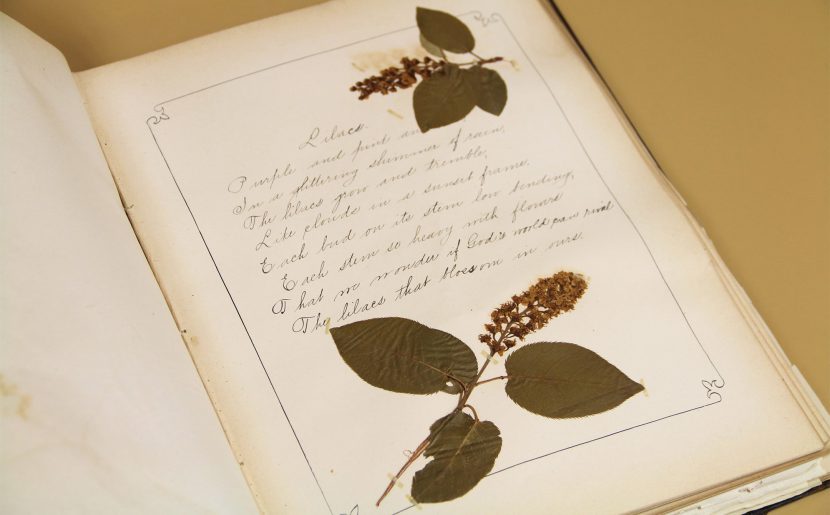 From the August 2017 BVM Center News

The Mount Carmel Archives recently acquired a treasure from Our Lady of Angels Academy in Clinton, Iowa, founded by the BVMs in 1872.

It is a book containing pressed flowers and poetry created by the Class of ’97 (presumably 1897!).

Terry Brock, of Cambridge, Ill., acquired the book at an auction for only $5. Thanks to his experience with herbariums, he recognized the quality of the finished book.

He also realized how important this book is to the history of the school. Given the school’s location, he initially contacted the Clinton Franciscans, who passed the information on to the BVMs. I subsequently contacted Mr. Brock, who graciously mailed the book to us. 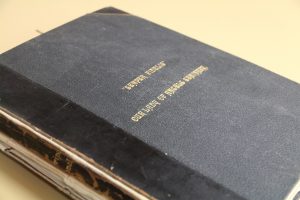 The book shows its age; the spine is split and the pages are yellowing. However, for a 120-year-old book, it is in remarkably good shape.

The title page includes the names of all seven graduates, surrounded by an elaborate, hand-drawn design crowned with the BVM lily.

The students collected a variety of flowers, plants, and leaves, and affixed each sample to a page using tape that still holds them in place.

In beautiful handwriting, each plant is identified by its genus and species as well as its common name.

Each flower is introduced by a short poem on the preceding page, most of them presumably written by one of the graduates, though the book does include at least one poem written by John Keats.

The book is entirely handwritten, without any errors. It appears to have been written by one person.

The pressed flowers are in remarkably good condition. The pressure of the cover and the pages preserved the structure of the leaves and blossoms. While the colors have faded somewhat, the pansies are still purple and yellow, the yellow violets are still yellow, and many of the leaves are still green.

After receiving this beautiful treasure, I wanted to see if I could locate any further information about the seven young women who put this book together.

In the mission files for Our Lady of Angels Academy, we also have a gradebook that includes the class of 1897. The first thing we noticed is that the name “Margaret Hayes” has obviously been added later, as it is written in pen and she has no grades.

The second thing we noticed is that “Katherine McDonnell” is missing from the list entirely. The other five girls were good students, with their final grade average in the 80s or 90s.

Interestingly, they all struggled with geography: only one of them had an average higher than 90. They all excelled in reading and arithmetic.

The book may have been written by Gertrude McCarthy, as she had the highest grade in “orthography.”

The book is a lovely example of education in the late 19th century. It allowed the graduates to show off their knowledge of science, literature, handwriting, and art.

More importantly to the BVMs, it adds another layer to the story of Our Lady of Angels Academy.