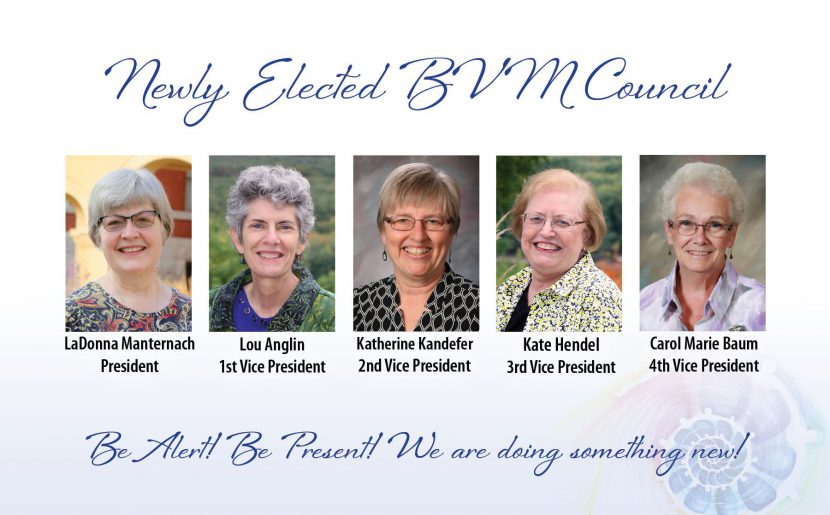 Sisters of Charity of the Blessed Virgin Mary chose leadership for the next four years at a virtual Congregational Assembly June 22–27.

LaDonna Manternach, BVM will be president of the congregation. Second vice president since 2016, she is a graduate of Beckman High School in Dyersville, Iowa, and Clarke University in Dubuque, where she earned a bachelor’s degree in music. Her master’s in music education is from Holy Names University in Oakland, Calif., and her doctor of musical arts in vocal performance is from the University of Hartford in West Hartford, Conn. A Cascade, Iowa, native, she served as an elementary music teacher in Iowa and California, and as assistant professor of music, and in campus/youth ministry at Clarke.

Lou Anglin, BVM will continue as first vice president, an office she has held since 2016. Born in Dubuque, she holds a bachelor’s degree in political science from Clarke University and a master’s degree in pastoral studies from Loyola Chicago’s Institute of Pastoral Studies. In Iowa, Alabama, and Missouri, Lou served as an elementary and secondary teacher and as high school campus minister. She was initial membership coordinator for the congregation and served as BVM senator, community board member, and on many committees.

Second Vice President will be Katherine Kandefer, BVM, who holds a bachelor’s degree in religious studies from Mundelein College in Chicago and a master’s in ministry from Creighton University. She served as a pastoral associate; diocesan director of catechesis; coordinator of initial membership for the congregation; associate director of the National Conference for Catechetical Leadership and director of conferences and events for the Theological Union, both in Washington, D.C.; and operations manager for the Religious Formation Conference in Chicago.

Kate Hendel, BVM will be third vice president. Currently serving as Secretary of the Congregation, she was a vice president from 2012-2016. She was a faculty member, campus liturgist, music department chair, director of general education, and dean of adult and graduate studies at Clarke University. She holds two master’s degrees (music and theology) and a Ph.D. in music education from Louisiana State University in Baton Rouge. She is a St. Louis native who has served on many committees within the congregation and outside the BVM community, including as a board member and past president of the Dubuque Symphony Orchestra.

Carol Marie (Joseph Louis) Baum, BVM will be fourth vice president. The Keokuk, Iowa, native is a graduate of St. Joseph Academy in Des Moines and majored in history with a minor in theology at Mundelein College in Chicago. She taught in Iowa, California, and Illinois, and ministered at Mercy Park Apartments in Des Moines. She served the congregation as an administrator and community representative.

The BVM Elected leaders bear a special responsibility to facilitate, encourage, and inspire Gospel living with the congregation and its presence and voice in the broader church and civic community.