In 1995, the United States celebrated the 75th anniversary of the 19th Amendment. Salt magazine carried this feature article by Rita (Borgia) Benz, BVM to note this significant celebration. She captured and shared personal stories from BVMs who remembered the time when women did not have the right to vote. 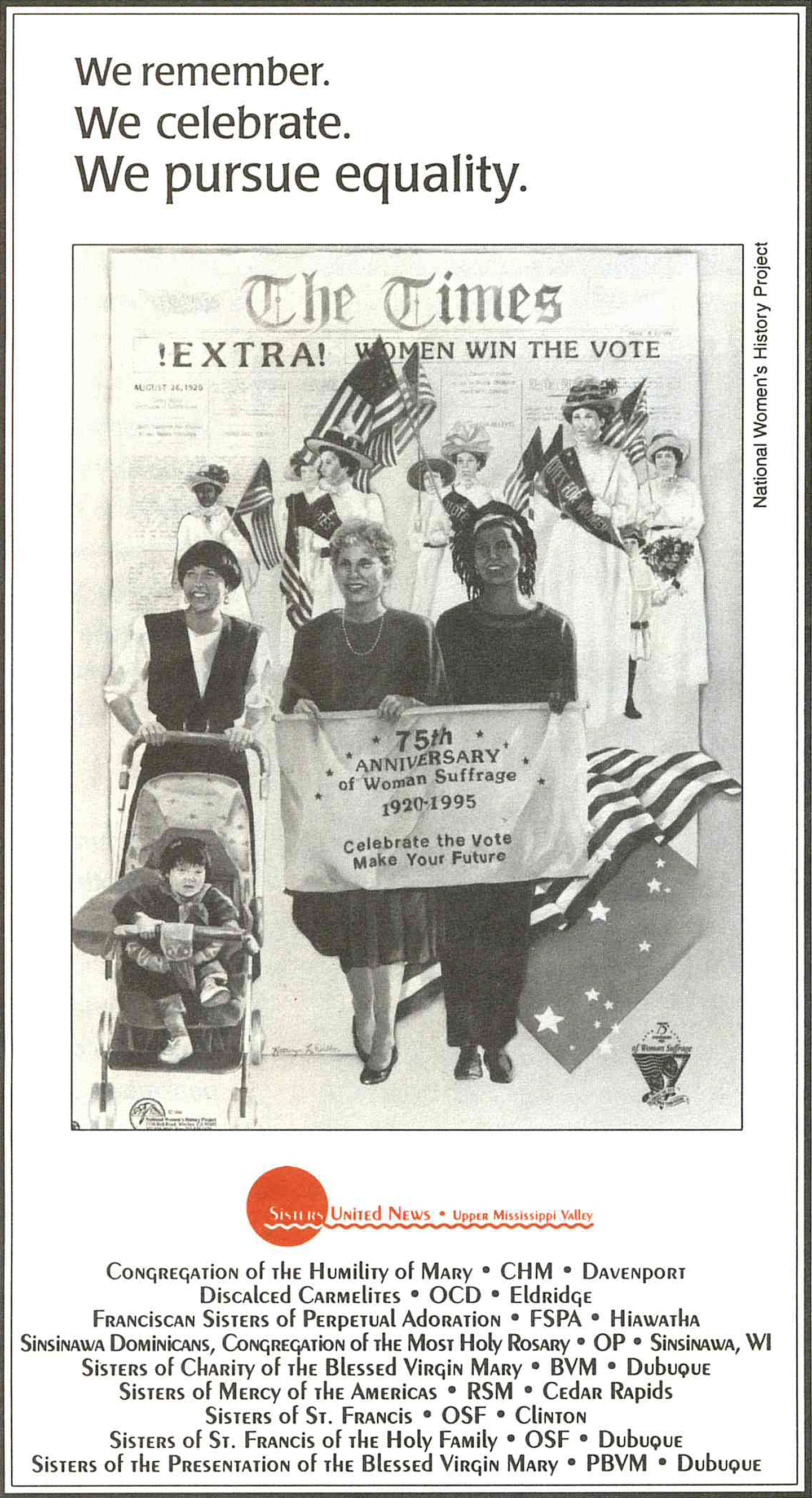 On Aug. 26, 1920, the 19th amendment was certified as part of the United States Constitution.

The passage of the amendment had its formal beginnings in 1848 at the first Women’s Rights Convention held in Seneca Falls, New York. The two-day convention was the first time citizens gathered to work specifically for women’s rights.

At the conclusion of the meeting attended by more than 300 people (mostly women), a “Declaration of Sentiments” modeled after the Declaration of Independence was adopted along with a set of resolutions calling for women’s educational opportunities, equality under the law, and the right to vote. Calling for the vote was considered by far the most radical of the ideas endorsed.

Conventions similar to Senaca Falls were held during the next 20 years. After the Civil War, the 14th Amendment was passed and included the definition of a citizen, which activists hoped would open the door to women’s vote. However, the 15th Amendment granted black men the vote but excluded women.

Eventually the Senate passed the 19th Amendment and the passage shifted to the states, with approval from 36 states needed for ratification. This came with the vote of the Tennessee legislature on Aug. 24.

Two days later without fanfare, the Secretary of State signed the 19th Amendment into law. Women had won the vote.

Celebrating the 75th anniversary of women’s right to vote, this year BVMs have been sharing their personal memories and findings ,which include an on-the-spot suffrage preview in the December 1912 St. Joseph’s Academy (now Clarke University) Labarum and a current documentary, A Century of Women, co-created by a 1958 Mundelein College graduate.

Across the country, sisters joined in local, state, and national events as they recalled and recreated the suffrage story in educational conferences, newspaper advertising, prayer services, and casual gatherings.

Memories
On the home front, Jean Gabriel Healy, BVM remembers standing with her mother on the porch of their home in Michigan watching a black gardener clean their yard. “That man can vote and I can’t,” Mrs. Healy declared. “This has to change. I have the right to vote.”

As a small child, Irma Corcoran, BVM broke away from her mother to walk in a Hannibal, Mo., parade that she now realizes was calling for women’s suffrage. “I was very young,” she says “but somehow I knew this parade was important.”

When she was a novice, Loretta Considine, BVM wasn’t old enough to vote with her sisters at Mount Carmel who went to the polls for the first time. Later she was teased because she still couldn’t vote on her first mission at St. Mary’s, Clinton. “I longed for the day when I could go into that booth and vote for the person I believed in,” she recalls. “I’ve never missed a vote since then.”

Patricia Taylor, BVM, an ardent genealogist, discovered that her right to vote had been championed by her great-great-aunt, Jeanette Taylor, a practicing Nebraska/South Dakota lawyer who in the early 1900s “closed taverns and worked for women’s suffrage.”

Marian Myers, BVM, who celebrated her 100th birthday earlier this month, has clear recollections of the struggle for suffrage.

In 1914, a cousin invited Marian to be a substitute at her bridge club. At that gathering the 32 women present—all in their 20s and 30s—decided to join the suffragists and learn as much as possible about the movement.

They planned a suffragist ball, and 19-year-old Marian helped make decorations, and attended. The group held a march, too, but rainy weather and a bad cold kept Marian at home. “They were very enthusiastic and read up on what was happening in the East,” she recalls.

Education
Graduates of Clarke and Mundelein Colleges took strong stands before and after the vote.

Bertha Beatrice Ball, Mount St. Joseph Academy student, in a 1912 Labarum article, “Views of Women Suffrage,” noted that, “Though opinions differ widely on the subject of granting the elective franchise to women, there can be no question that the movement is one of the most important political facts of the day . . . .

“Arguments against women’s suffrage which were plausible 50 years ago are now inadequate to cover the ground of controversy; for today millions of women are born into conditions which force them to become the wage-earners of the family, to take their places beside men in the world of business . . . A woman who has to pay heavy taxes on her hard-earned savings should have the right to help decide what shall be the rate of those taxes.”

Lynne Sheeran Tuite, Mundelein College ’58, is founder and partner of VU Productions in Universal City, Calif. The television productions company has been nominated for three Emmys ( the TV industry’s “Oscars”) for the six-hour landmark series, A Century of Women.

The documentary examines the changing roles of American women against the landscape of 20th century social technologic and political revolution.

“We wanted to give expression to those voices not generally heard in mainstream media. Our big dream was to tell the story of this century from a woman’s perspective—and this series is that dream come true.”

Tuite, who majored in English and was freshman and senior class president, says the influence of the BVM sisters helped her succeed in her career, as well as her life.

“They were so far ahead of their time,” she says of her Mundelein professors. “They set a great example, and they gave us permission to be who we wanted to be when the era wouldn’t let us. I still have a monthly phone conversation with Katharine Forsyth (aka Sister Mary St. Ida). I always hang up the phone in wonderment at the new and wonderful ideas we discuss. The Mundelein women are a continuing source of inspiration for me.”

Commemorations
At the BVM Senate’s Denver meeting this summer, Rose Mary Meyer, BVM (BVM Women’s Office) reminded participants that, “This is a liturgy of thanksgiving and gratitude for the heroines of the suffrage movement. We honor the wisdom, the equality, and the persistence of those women and men who struggled for almost 75 years so that women could vote. The readings for today’s liturgy were chosen to celebrate that struggle.”

BVMs joined with eight other religious congregations based in the Upper Mississippi Valley in placing an ad in six diocesan and local papers (above). All the religious communities involved have a long history of ministry to women, particularly in education, health, and social services. Ministries which empower women and advocacy for full participation and equal treatment of women in society are among the priorities of these communities.

“This 75th Anniversary of women’s suffrage is a time for us to envision and to insure a less violent society for children, women, and men,” says Rose Mary.

“We need to support candidates whose values mirror ours, be informed voters, participate as judges of elections, and continue contact with those elected to hold them accountable. These actions express our gratitude 75 years later for the privilege of voting won by an almost century-long struggle.”

About the author: Rita Benz, BVM is a volunteer and a member of the Salt Editorial Board.