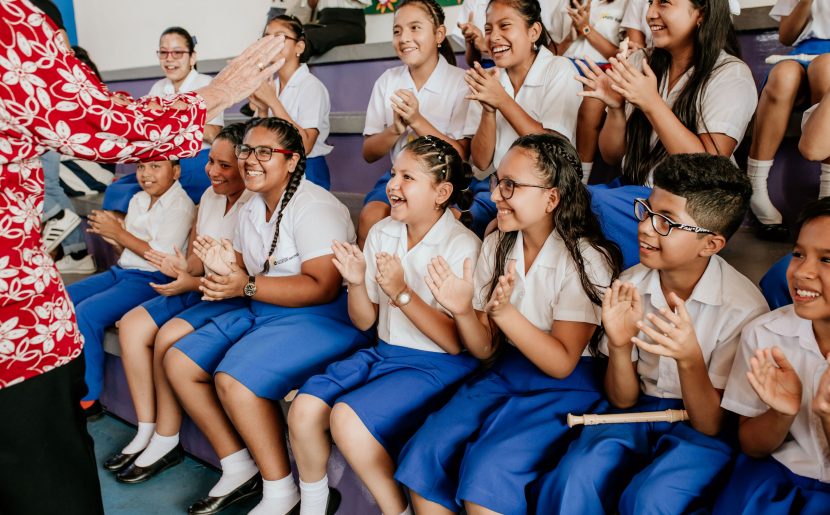 One Sunday morning, on the cusp of the first steps toward the dream of BVM Associates Pat McTeague and Sonya Rendón of creating a unique school that would serve the educational needs of poor children in Ecuador, Pat was listening to the New World Symphony by Dvorak. Pat describes the music as gentle in some places, bombastic in others. The symphony, which was Dvorak’s effort to bring “something different to an unexpected place,” inspired the name of the school, Nuevo Mundo.

Like most awe-inspiring lifetime endeavors, Nuevo Mundo had humble beginnings. Motivated by the social justice precepts of Observe-Reflect-Act, Pat and Sonya first witnessed realities in Ecuador such as social class division, inequality, and the lack of basic resources, including education.

Reflection and dialogue between them and Sonya’s mother, Celeste, blossomed into a dream of creating a school which provided quality education for children who could not otherwise afford it. They began to take action toward fulfilling this vision of a “New World.”

Preparing and securing funds for the endeavor was the initial course of action. Sonya received a scholarship from the BVM community to study at Mundelein College in Chicago in exchange for cooking at Immaculata High School. This preparation facilitated Sonya’s ability to receive credentials to start the school from the Ministry of Education of Ecuador.

Pat and Sonya were advised to begin by working with the wealthy, so the school was launched with one class for tuition-paying students and increased by one class per year.

It takes a village to cultivate and harvest a dream. Pat and Sonya recognize the support they have received from multiple sources. Sonya’s parents, Rodolfo and Celeste, were co-founders of the school. They relinquished their home as the space to begin the school for children who paid tuition.

Sonya’s brothers, one an engineer and the other an architect, later designed and built the school on the property where it is currently located. Friends raised funds and offered a variety of supportive services.

Sisters from the BVM community have offered time and talent over the years.

Five years after Nuevo Mundo began to accept students who paid tuition, the school was ready to begin the mission of serving children who did not have access to an education. BVMs Kathy (Richard Marie) Conway and Theresa (Dorothy) Gleeson were instrumental during this transition. They traveled to the nearby Pueblo of Duran, where families lived in poverty conditions, and began to talk to people about the opportunity for a quality education for their children.

Initially, it was a challenge to gain the trust of the residents of Duran, who had experienced exploitation from foreigners. Perseverance and commitment to being a loving presence eventually bore fruit and Kathy and Theresa connected with the community.

Duran had only dirt roads at the time and Theresa and Kathy recount the story of getting stuck in the mud. Male residents of the town rallied and utilized their knowledge and abilities to extract the truck. One of the men invited the pair to his home where his wife proceeded to wash their feet. Theresa reflects, “We were deeply touched by this. They did not know us and it was beautiful for them to be so Christ-like.” The son in this family became the first student of the Foundation school.

My heart burned when I heard the message of transforming the lives of these children who had no possibility of an education.” Kathy Conway, BVM

Kathy taught students in both schools, acted as coordinator for the Foundation, and provided transportation to and from Duran. Kathy reflects on her call to become involved in the mission, “My heart burned when I heard the message of transforming the lives of these children who had no possibility of an education.”

Theresa worked with Celeste in forming base communities for spiritual reflection with mothers from both schools. Theresa recalls that there was much resistance on the part of the wealthy parents to share resources with the poor, but eventually attitudes and stereotypes began to transform. Theresa recalls, “It was a joy and a privilege to be with the people of Ecuador and Pat, Sonya, Celeste, and Rodolfo. They were the kind of people who would give everything they had for the poor.”

Other BVMs have given large and small amounts of time to the ministry throughout the years. Ann Credidio, BVM taught in the preschool for a number of years before she was introduced to the hospital for people with Hansen’s Disease and embarked on a dream of her own.

Luann Brown, BVM began a program for children with learning disabilities and attention deficit disorder. She trained an Ecuadorian teacher to continue the program. Luann also directed the English program for the Foundation. Many other BVM sisters and associates have offered time, resources, and support.

In addition to the school, which currently has 970 students in the morning school for those who pay tuition and 265 students in the Foundation, the mission of the Fundación Nuevo Mundo has expanded to create medical centers and day cares in various areas of Duran. Teachers in the day cares were recipients of Mary Frances Clarke Scholarships that enable them to update credentials and keep their jobs to meet the requirement of Ecuador’s Ministry of Education.

When questioned about the future of the ministry, Sonya reflects, “As the river follows its course, so life and education are in constant change. We have to be aware of change and live in the present moment. The only unchangeable thing is God’s love no matter your race, religion, or region. We need to read the part of the gospel over and over again that tells us that others will know we are disciples if we love one another.”

Pat adds, “I think it is good to look back and see all the wonderful people who made this a success. I am happy to have been a part of it and am convinced that it is the work of God that will continue through the young people who benefitted from our efforts and will carry on the ‘New World’ of love and justice.”

The work of love and justice continues. Sonya’s nephew, Rodolfo, and an alum are current directors of the school. At a recent Nuevo Mundo 35th anniversary celebration, 275 graduates of the Foundation, who are all professionals, returned. As Celeste once stated, “If it is God’s work, it will survive despite our mistakes.” Nuevo Mundo continues to survive and thrive. Sonya shares, “Now we smile a lot.”

About the author: Luann Brown, BVM worked at Nuevo Mundo as a teacher for children with learning disabilities and attention deficit disorder and as the coordinator of the English program in the Foundation. Currently, Luann is ministering as a substance abuse counselor at Presence Behavioral Health in Westchester, Ill.

Fall Salt 2019: ‘Together We Make the Path by Walking’