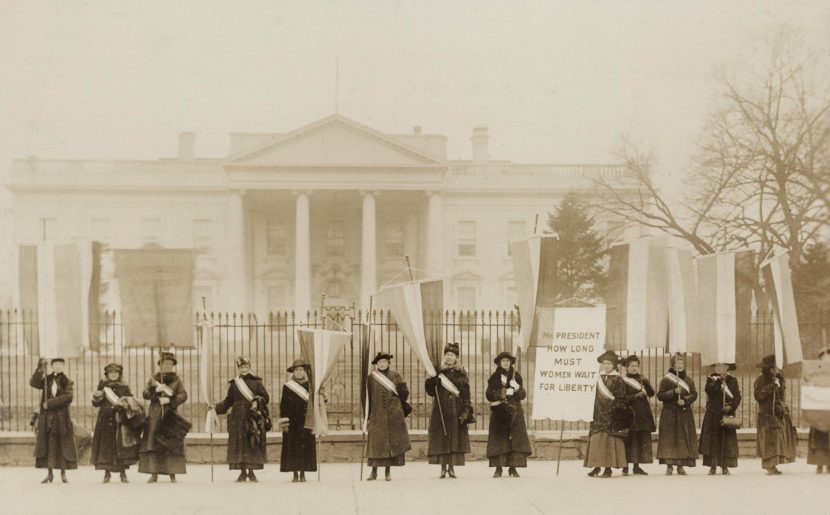 Voting is the significant decision-making moment for citizens of the United States. A healthy democracy calls its citizens to participate in its governmental process. As we celebrate the 100th anniversary of the women’s right to vote, Carolyn (Lester) Farrell, BVM shares with us a timeline of how the perseverance of so many led to winning that right.

Today, men and women who meet the qualifications indicated in the Constitution cast their vote for president of the United States; this is considered an honor and a responsibility.

It was not always so. This year, Aug. 26, 2020, marks the 100th anniversary of the passage of the 19th Amendment to the Constitution of the United States.

The old-time civics teacher will tell you that the 19th Amendment granted American women the right to vote, a right known as women’s suffrage.

That right, however, was not easily recognized by men in office or a majority of the U.S. population.

The passage of the 19th Amendment required nearly 70 years of arduous work to build support, to formulate, and to present this amendment to Congress.

Elizabeth Cady Stanton and Lucretia Mott were the prime movers and shakers who organized the first women’s rights convention in 1848 at Seneca Falls, N.Y. These two women were a driving force of additional women’s rights conferences in various parts of the country, and they were eventually joined in their advocacy work by Susan B. Anthony and other activists.

At the convention, a group of delegates led ty Stanton produced a Declaration of Sentiments document—modeled after the Declaration of Independence—that supported the delegates’ belief that women should have the right to vote. Following the convention, the notion of women having the right to vote was met with mixed reactions of support, as well as rejection of the “crazy proposal.”

Meanwhile, the onset of the Civil War moved the energy of many women to the needs of the war effort. After the war, women were divided among themselves regarding their support of the proposed 15th Amendment that provided the right to vote to African American men.

Some women thought that joining the American Woman Suffrage Association (AWSA) would provide them an opportunity to bring forth the discussion and support of women’s right to vote.

The plan didn’t work. The 15th Amendment was ratified in 1870. Black men could vote, not women.

In 1869, Stanton and Anthony formed the National Woman Suffrage Association (NWSA) with their eyes on a federal constitutional amendment that would grant women the right to vote. These women didn’t give up—they kept on keeping on.

In 1878, the NWSA and the collective suffrage movement had gathered enough influence to lobby Congress for a constitutional amendment. However, the result of the study and debate in the House of Representatives and Senate was an unsuccessful attempt to pass the amendment.

In 1890, the NWSA and the AWSA merged to form the National American Woman Suffrage Association (NAWSA). The new organization’s strategy was to lobby for women’s voting rights on a state-by-state basis.

In 1900, with the committee’s energetic Stanton and Anthony advancing in age, Carrie Chapman Catt stepped up to lead NAWSA. She played a significant leadership role in the successful support for women’s enfranchisement at the state levels. Between 1910 and 1918, 16 states and the Alaska Territory extended voting rights to women.

Stanton’s daughter, Harriet Stanton Blatch, introduced parades, pickets, and marches as a means of calling attention to the cause.

These strategies succeeded in raising awareness and led to unsettling days in Washington, D.C. As President Wilson was enjoying his 1913 pre-inauguration activities, protestors blocked a massive suffrage parade in the nation’s capital and hundreds of women were injured. This happening did not move Wilson, who did not support women’s desire to vote, and no action took place.

In 1918, however, President Wilson changed his mind and supported the amendment that would give women the right to vote. He tied his support to the positive role of women in World War I.

Regardless of Wilson’s new-found support, however, the amendment proposal failed in the Senate by two votes. A year passed before Congress took up the measure again.

Two weeks later, on June 4, 1919, the Senate passed the 19th   Amendment by two votes over its required two-thirds majority, 56-25. The amendment was sent to the states for ratification.

By March 1920, a total of 35 states approved the amendment, one state short of the two-thirds required for ratification.

The Southern states strongly opposed the amendment. In a dramatic situation, 23-year-old Harry T. Burn, representative of Tennessee, facing a 48-48 tie in the legislative body, cast the tie-breaking vote. The amendment was ratified!

On Aug. 26, 1920, the 19th Amendment was certified by U.S. Secretary of State Bainbridge Colby, and women finally achieved their long-desired right to vote.

In October of 1920, Mother Mary Isabella sent a letter to the BVMs stating, “It is deemed well for the Sisters to register in order that they use their privilege to vote when an important issue is in question.”

On Nov. 2, 1920, more than eight million people across the United States voted in elections for the first time, BVMs included.

One hundred years later, it is imperative to exercise this hard-won right.

About the author: Carolyn Farrell, BVM, was a longtime advocate for women in leadership. She was the first woman elected to the Dubuque, Iowa, City Council, and served as the city’s mayor in 1980.

Just a Pinch
In 1995, the United States celebrated the 75th anniversary of the 19th Amendment. Salt magazine carried a feature article by Rita Benz, BVM to note this significant celebration. She captured and shared personal stories from BVMs who remembered the time when women did not have the right to vote. Read the article:
bvmsisters.org/women-win-the-vote

Summer Salt 2020: Opening Doors With Love
In this issue of Salt, we rejoice in the life of former President Dolores Marie McHugh, BVM. See how BVMs continue “to act justly, love tenderly, and walk humbly with your God,” (Micah 6:8) as they build relationships with students at Clarke University in Dubuque, Iowa, connect with the Earth and each other, and pray through the pandemic. Explore how doors opened to give women the right to vote and increase women’s rights in the United States and around the world.