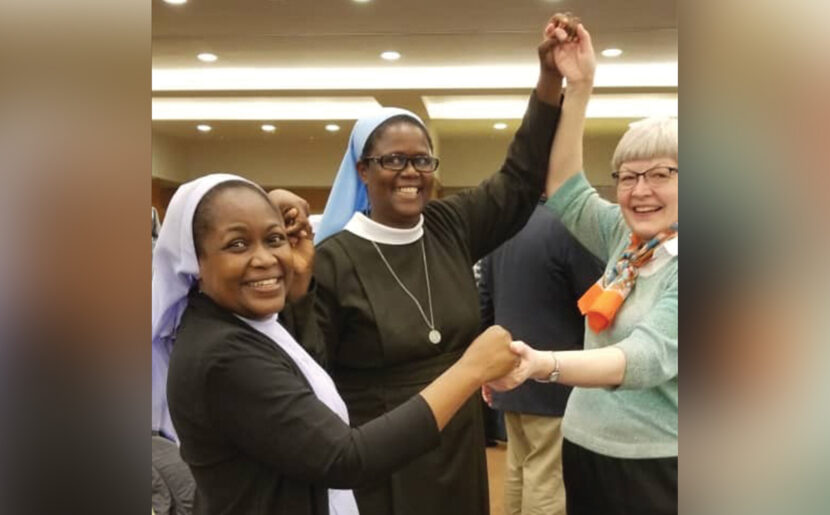 LaDonna (r.) shares some laughs with new friends.
BVM President LaDonna Manternach attended the International Union of Superior General (UISG) meeting in Rome, Italy, May 2–6. Over 500 women religious (plus 200 via zoom) filled the conference room of the Ergife Palace Hotel. LaDonna was in good company as half of the in-person participants were also first time UISG attendees.

Arranged by language groups, LaDonna met her tablemates—other congregational presidents and mothers general—with whom she would be spending the next five days exploring, discussing, and crystalizing what they would learn about “Embracing Vulnerability on the Synodal Journey.” She had one American at her table, as well as women from South Africa, Zimbabwe, Ghana, Poland, and Norway.

Every spoken and written word was translated into multiple languages, including Arabic, English, French, Polish, Italian, Portuguese, and Spanish. Getting used to multiple languages and using the translation headphones was cumbersome at first. “A real sense of mental focus and concentration was required,” she shares, but by the second day she felt much more settled.

Each day was filled with speakers, table conversation, quiet time, and prayer. One speaker who notably impacted LaDonna was Dr. Jessie Rogers, an Old Testament specialist and theology department dean from St. Patrick’s Pontifical University in Maynooth, Ireland. “Jessie wove everything beautifully together with scripture.”

Three words stood out to LaDonna from Jessie’s speech: Remember. Forget. Notice. “Jessie said, REMEMBER. Remember so that you can recognize God’s footprints (traditions, charisms, stories from one generation of sisters to another). But then, FORGET. Forget enough to create space for God’s newness . . . to be open to new possibilities.” Lastly, Jessie used the word NOTICE. Notice that God is doing something new. “We know God will take us further in the story. Be open and responsive to that new thing.”

On the fourth day, Pope Francis spoke to attendees in Paul VI Audience Hall at the Vatican. Overcoming thoughts of “Is this real?,” LaDonna was able to watch him on a large monitor while getting a few pictures with her phone. She shares, “He has a great sense of humor, sincerity, and belief in the synodal journey.”

Pope Francis warned against being frozen—rigid and unwilling to change—and summarized his thoughts humorously with “We don’t want frozen nuns!”

LaDonna considers this an opportunity to “renew” Vatican II. “There was so much hope about the changes . . . there was a real energy.” She shares that for many years there was pushback—feeling it had “gone too far,” but adds, “this is an opportunity to have the pendulum swing the other way again, to look at it once more and what it was trying to express . . . and being open to what the Spirit is drawing us to do.”

Saying good-bye to new friends, reflecting on what she had learned, and returning home has been a whirlwind. “I had heard from those who had gone before that this was such a wonderful experience, and it truly was. It was hard to believe I was in Rome . . . someday I’d love to visit some of the parts of the historical city. But the fact that I stood in St. Peter’s Square was enough for me!” 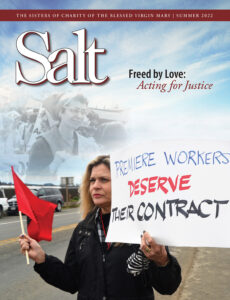