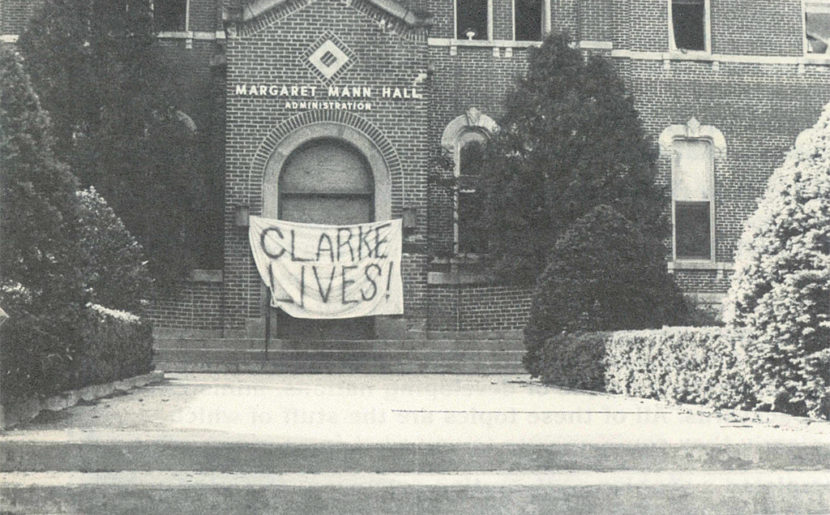 This article was published in Salt Magazine in 1984. Captions and text have been left in their original form as they were originally published.

CLARKE LIVES! The message was clear and specific when it was spray-painted by hand on a white bedsheet and draped on the picket fence guarding Margaret Mann Hall only hours after the disastrous fire at Clarke College on May 17. Although Sacred Heart Chapel, the library beneath it, and the three most tradition-filled buildings on campus were destroyed, the sign proclaimed that the fire had not defeated the spirit of courage and resiliency which had been nourished and developed for years in historic Margaret Mann, Rose O’Toole, and Mary Bertrand Halls, all named after women who founded the BVM congregation.

Just two days after the fire, the 141st college commencement was held as scheduled in the theatre of Terence Donaghoe Hall which was un­touched by the fire, as were all three residence halls, the major classroom building, recreation center, fine arts building, union and computer center. As proud graduates exuberantly embraced relatives and friends outside the theatre, across the street the stark remains of the charred buildings underscored the ending, not just of an academic year, but of an entire era.

Standing erect above the rubble, however, a single chapel spire signaled the determination to survive and to grow with change, which has permeated the campus since spring. On the ground below the spire, a chain of people passed thousands of books individually from one to another as all salvageable volumes were moved from the smoke and water damaged library to storage rooms in Mary Josita Hall or to refrigerated semi-trucks for protection against mold.

From graduation weekend in May, until the opening of the current academic year on August 29, the message which appeared on the fence immediately following the fire, and later on the large double doors of Margaret Mann Hall, has been transformed from words on a sign to a dynamic reality: CLARK LIVES! By the end of May, all administrative offices had been relocated in the guest dining rooms, the off-campus student lounges, and the first-floor residence areas of Mary Josita Hall. On June 4, the first of three scheduled summer sessions began, with some classes taught by teachers who had lost all of their professional materials in the fire.

Identification badges, which were required for the safety of everyone on campus during the sum­mer, were replaced in August by buttons continuing to declare: CLARKE LIVES! The same message greeted guests at a picnic given in July to express gratitude to all who helped in the aftermath of the fire. Approximately 700 people joined in the celebration, described by one reporter as an event that “seemed like a family reunion;’ and affirmed that the college was making a “quick rebound from the disaster:’

Throughout the summer, the library director, staff, student employees, and BVM volunteers work­ed ceaselessly to reconstruct a substitute library in its new location on the ground floor of Mary Benedict Hall. An astonishing 80% of the total col­lection was saved. Additional volumes have come from several contributors, including a gift of over 10,000 books from Dominican College in New Orleans. Despite cramped quarters for both books and people, and several modifications in lending procedures, library services are currently remarkably complete. Not only are adequate resources for study and research available, but im­proved computer systems promise to make holdings even more immediately accessible than they were in the former library.

Liturgies, too, have been moved from the familiar surroundings of Sacred Heart Chapel to alternate locations. Though everyone familiar with the college mourns the loss of the cherished physical space so long used for communal worship, the spirit of a community at prayer lives vibrantly each day in the small chapel of Mary Josita Hall and on Sunday in Alumni Lecture Hall.

People as well as things and events have also been relocated in new surroundings. Faculty who lost offices in the fire have joined their colleagues in smaller, interim spaces in Catherine Byrne and Eliza Kelly Halls. Most of the thirty BVM sisters whose residence areas were destroyed in the fire temporarily moved to the second floor of Mary Benedict Hall for the summer. Since then, the traditionally large BVM community on campus has been re-established in several smaller living areas. Fifteen sisters still live in Mary Josita and Mary Benedict Halls. Others have moved to a recently renovated section of their building generously offered by the Sisters of the Visitation, to newly developed apart­ments in a school building at St. Columbkille’s, to Wright Hall, to Mount Carmel, and to various other houses throughout the city.

As adjustments continue in the shadow of burned beams and crumbling bricks, the entire college community has learned the decision concerning the ultimate fate of the ruined buildings. President Catherine Dunn, BVM announced October 3 that all three administrative buildings involved in the fire—Margaret Mann, Rose O’Toole, and Mary Bertrand halls—will be demolished and replaced.

Wood, masonry, and structural experts have ruled that the buildings are structurally unsound. Demolition is expected to begin after November 1.

“It’s an exciting new era;’ the president said of the decision. “Now we are able to move forward and create the college’s future.”

Clarke lives because its people live.