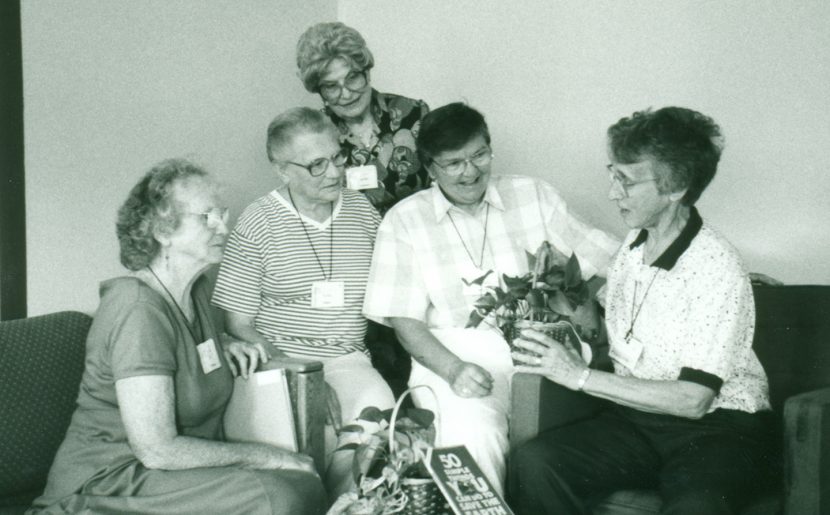 Every day is Earth Day for two BVMs: Marge Clark, assistant professor of education at Clarke University in Dubuque, Iowa, and Gayle Brabec, director of the Garden Project in Lexington, Ky.

Each, because of her experience with a disrupted ecology, has undergone a conversion of attitude toward the “house” in which she abides; each, because of her growing awareness of the fragility of the Earth, has modified her lifestyle and actions to support, rather than erode, the dynamic “house” called Earth.

For Gayle, the foundational experience came several years ago when she was working in rural Iowa. “Several members of some farm families with whom I worked had experienced maladies related to the use of commercial fertilizers and pesticides,” she recalls.

At that time there was a dawning awareness that there was a higher incidence of cancers in areas of Iowa where row crops were grown than in areas where other agricultural products originated. “Some of these farmers adopted strictly organic cultivation methods,” Gayle goes on, “and found that they and their family members felt better physically.”

Economically, the demand for organically grown fruits of the land burgeoned as U.S. consumers began to worry about the ill-effects of diets which included byproducts of insect-destroying chemicals used by farmers on fruits and vegetables and of hormone additives to livestock feed.

That and similar experiences drew Gayle towards a new awareness of her environment. “That means every aspect of conservation,” she explains, “walking rather than riding, omitting chemicals in controlling weeds, limiting water use.”

Gale is convinced that the Earth is finite and cannot heal itself at the rate at which we humans are destroying its ability to do so.

Marge’s attention first was drawn to environmental responsibility by an event in an urban setting. “The year of the first Earth Day,” she remembers, “I had students come to me complaining about being covered with soot after football practice in the Pilsen neighborhood of Chicago.” The source of the soot was particulate emissions from a brewery across the street.

Marge and her students began to investigate. “Students and parents collected data, organized it, studied regulations, got testing material from the Environmental Protection Agency. After a whole lot of work, they concluded that the brewery was in violation of the law. The students presented a brewery manager with the data and informed him of their intent to go to the neighborhood newspaper if the emissions continued to be above the legal limit.

Marge smiles when she recalls the next part: “The emissions continued, so the students took their story to the neighborhood newspaper, where it was featured on the front page, and the story was later picked up by the Chicago Sun-Times a few weeks later.”

The Chicago air pollution control unit became interested in the story, and the brewery later ended the Pilsen soot problem by moving to the suburbs. “All of us who worked on the project had our consciousness raised and brought the lessons into the future with us,” concluded Marge.

As Marge found her own behavior becoming more Earth-friendly, she began to incorporate her new awareness of Earth’s fragility into her classrooms. In training pre-service elementary instructors how to teach science and social studies, Marge makes use of environmentally grounded curricula. As a spiritual basis for her teaching, she relies on the Earth spirituality of Native Americans, using readings from the Lakota and other nations.

Gayle, too, finds impetus and support for ecological stances from Native American spirituality. She says, “Iroquois grandmothers ask about any decision, ‘How will this affect the sixth generation?’”

For Gayle and for Marge, the ecological is the personal. Their message is clear: taking care of our Earth, our “house,” is for all of us. If we don’t, a battered and depleted Earth will become less hospitable, and ultimately, uninhabitable.

The time is now. Every day must be Earth day.

About the author: Teri Hadro, BVM, is a genetic counselor at Children’s Memorial Hospital, Chicago. Teri is now president of the BVM Congregation.