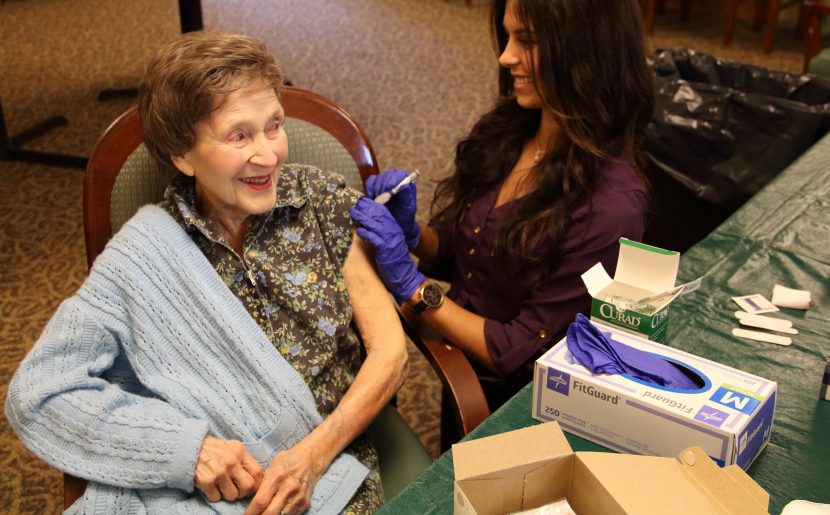 BVM Rosalie Glanz receives her flu shot at Mount Carmel in Dubuque, Iowa. Sisters and staff are getting shots this week to prevent a potential winter outbreak.


The flu season is upon us, and while it still can be deadly, immunizations help avoid pandemics. Read on to learn about how Mount Carmel fared in a past flu outbreak.

Spanish Flu ravaged the world from 1918–1920. Despite the name, it did not originate in Spain—due to its neutrality during World War I, Spain was one of the few countries that did not censor its newspapers, thus giving the impression that Spain was especially hard-hit.

The exact number of deaths due to the flu is unknown, but is estimated to be between 50 and 100 million people, approximately 3–5 percent of the world’s population at the time.
Unlike most flu epidemics, the young and healthy had the highest mortality rate—almost half of its victims were between the ages of 20 and 40.

I recently read a book called Pale Rider: The Spanish Flu of 1918 and How it Changed the World by Laura Spinney. Rather than simply telling the story of how the virus spread, the author also explores the impact the pandemic had on the post-World War I world. After reading this book, and in anticipation of the upcoming flu season, I wondered how the Mount Carmel Archives documented the Spanish Flu epidemic.

Our Herald first mentions the influenza epidemic in the October 1918 issue. It described an “epidemic of influenza and pneumonia” as a “calamity unprecedented in . . . history.” It noted that in many places schools were closed, so members of the congregation “entered wholeheartedly and unreservedly into the work of giving aid to the victims of the epidemic regardless of creed, race, nationality.”

As of the time of publication, “no member of the Congregation has died, nor has any of the children attending our schools” though “more than thirteen thousand soldiers have died.” It also notes that in many cities, Oct. 13 and 20 were “churchless Sundays” due to the epidemic, though “we had religious services as usual” as there was no restriction on private chapels.

Six months later, the April 1919 edition of Our Herald shared a note from the Secretary of the Society of St. Vincent de Paul thanking the sisters for their assistance in Dubuque. A “sincere vote of thanks” was extended “for the valuable assistance . . . rendered to our Visiting Nurse.”

One year later, in April 1920, Our Herald reported that the epidemic struck Mount Carmel in February 1920 and lasted “two or three weeks.” Daily adoration was kept “to implore God’s mercy and the cessation of the strange disease that proved fatal in all parts of our country.” Three sisters and one novice died as a result of the pneumonia caused by the flu: Hilda Fitzgerald, Placidius Doyle, Veronica Dumphy, and novice Marguerite McDonald, who took vows on her deathbed. A fourth sister, St. Michael Lenhart, died at Holy Angels Academy in Milwaukee of flu complications. Lewine Enderle recalled that the sisters cared for her in the convent as the hospitals were full.

But Our Herald is not the only documentation of the Spanish flu found in the archives. On Oct. 16, 1918, Cecilia Dougherty wrote to Acarda Ryan with the news that Dr. Lenihan and his cousin had both died of flu and Dr. Lenihan’s sister was in the hospital. She also expressed a wish to visit, but couldn’t because she was “influenza bound.” Two days later, Cecilia wrote to her cousin, Basilla Burke, that Iowa was having “an awful time . . . fighting the ‘Flu.’” She also shared that the churches and schools were closed and people were “dying by wholesale, expecially [sic] priests and Drs.”

Like so many world events, it is very easy to lose track of how the pandemic affected “ordinary” people. But sources like Our Herald and Mother Cecilia’s letters reminds us that “history” impacts everyone on a very personal level.

About the author: Jennifer Head is the archivist at Mount Carmel in Dubuque, Iowa.